Magneto has the ability to move steel, but can he move liquid or molten steel, so he can use it to burn buildings and humans?

In X2: X-Men United, we see Mystique inject a solution containing a high concentration of iron into the buttocks of prison guard Laurio: 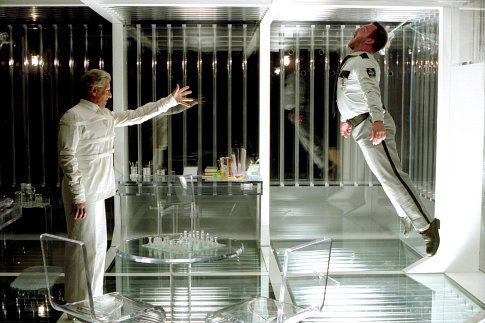 By the same token, he should be able to manipulate aqueous solutions of steel, given the iron concentration in most instances of steel.

As for liquefied or molten steel, I can't find any examples in any canon, but perhaps someone else's knowledge of obscure Marvel facts is better. Based on out-of-universe reasoning alone, the answer would seem to be "no", via tuskiomi's nice answer.

Here's why:
I'm assuming that magneto operates on the fact that he can disturb the natural magnetic field in a given space. I'm also assuming that he can't do any other funky things (extraneous powers). Iron, in a solid state, will take on magnetic fields easily, because the electrons are easily manipulated and aligned based on the orientation. Molten Iron, however, cannot conduct magnetic fields, as the electrons now have much more energy, and as a result, are only affected slightly by magnetic fields. By slightly, I mean that the most powerful magnets here on earth couldn't manipulate the liquid. And magneto probably couldn't, either.

By physics, Magneto should be unable to move iron that's above its Curie point (the temperature at which a phase transition renders the material non-magnetic). This transition takes place many hundreds of degrees below the melting point of iron. He should also be unable to move dissolved iron, which is ionized and hence lacks the electron properties to be ferromagnetic.

In comic canon, however, he has historically been able to move even the iron in the hemoglobin in his own blood (in order to levitate/fly), as well as things which ought to be non-magnetic (even metals other than iron and steel, never mind non-magnetic stainless alloys). Even in the movies, his encounter with Laurio defied physics; either the iron was dissolved, and hence non-magnetic, or it was a suspension of non-magnetic stainless steel (else it would have corroded to a red or black color before it could be injected).

With both comics and movies ignoring physics, then, there's no reason Magneto couldn't move molten iron. One could make a case that he's using induced current loops to provide the reaction, hence allowing him to move anything conductive (at the cost of a great energy expenditure and resistance heating from hysteresis losses).