What is the "correct" pronunciation of Princess Leia's name?

A colleague with the same name recently pointed out that in a New Hope the pronunciation "Lee-ah" is used. However, in later movies, "Lay-ah" is more common.

What is the correct pronunciation of Princess Leia's name? Are there any out-of-universe comments by George Lucas referencing this?

The people closest to Leia (in-universe) and that appear later (out-of-universe) all pronounce her name the same way: LAY-uh.

However, it does seem at the time A New Hope was filmed and released the pronunciation may have been; LEE-ah.

In the scene where Padme gives birth, Obi-Wan asks her to name the children. At about 0:47 in the video Leia is born. Padme clearly pronounces it LAY-uh.

Also, Senator Dodonna uses the LEE-uh pronounciation during the briefing prior the assault on the Death Star. Heard at about 0:11.

Luke calls out to Leia vocally but is trying to use the Force. He uses the LAY-uh pronunciation. See this around 0:50.

When Luke is talking to her about their mother he pronounces it LAY-uh. This occurs at about 0:04.

When Leia and Han reunited, Han pronounces it LAY-uh at about 0:30.

Out-of-universe: Episode IV was the first film released and seems to be the only place where the name is pronounce "Lee-uh". Newer movies all have the same pronunciation, so it appears that a decision was made to either change or standardize her name after the first film.

In many interviews from the time period the pronunciation is also LAY-uh by the hosts and the actors: here is one example of Carrie Fisher doing just that at about 1:07

George Lucas pronounces it as "Lee-ah".

Given he directed the A New Hope, but not Empire Strikes Back or Return of the Jedi, it's easily possible that he controlled how the actors pronounced it in the first film but it was not discussed in the next two. By the time Revenge of the Sith and later movies had come out, pop-culture had already settled upon the "Lay-uh" pronunciation.

The (canon) Star Wars factbook Star Wars Made Easy: A Beginner's Guide to a Galaxy Far, Far Away includes a handy pronunciation guide. 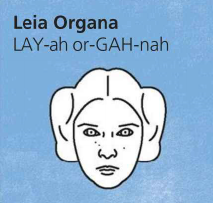 It was originally pronounced Lee-ah, not Lay-ah, in 1977's original release of Star Wars before all the director's cuts. Both Grand Moff Tarkin, and the Rebel alliance commander clearly pronounce Leia's name as Lee-ah.

The first pronunciation of Lay-ah, publicly, that I recall was on the first run of Kenner action figure toy releases, circa 1978, when the TV commercial voiceover pronounced it Lay-ah. We, original Star Wars fans, in the school yard thought it was a mistake in the TV voiceover's pronunciation but then her name was pronounced Lay-ah from Empire Strikes Back onwards.

Therefore, it seems that George Lucas was already confusing Star Wars's fan base with disjointed continuity from the very start!

I was there! I'm an original 10 year old Star Wars fan who was obsessed with the movie after seeing it in its original format (before it was called Episode IV: A New Hope) in the theaters five times in 1977. I had the toys, fan magazines, T-shirts, memorized the movies lines, etc.

C-3PO and General Dadonna both say 'Lay-ah' so given that was the version I watched the most in the 80s, that's what I refer to her as.

The reason is clear. In the 1978 television program "The Making of Star Wars," Carrie Fisher pronounces the name LAY-uh and she is the motivation for the mis-pronunciation that is applied afterwards.

Furthermore, the original 13-page treatment to Star Wars is strongly based off the 1958 Akira Kurosawa film "The Hidden Fortress," which is actually titled: "Three Bad Men of the Hidden Fortress." The Princess Leia character in the film is Princess Yuki whom Kurosawa modeled after the look of Elizabeth Taylor (the woman who stole Carrie Fisher's father from her mother). [Kurosawa states this idea explicitly in the supplementary materials to the DVD release of "The Hidden Fortress."]

"The Hidden Fortress" is based on a 1926 John Ford film "3 Bad Men," in which the heroine is named: "Lee Carleton." Princess Leia and her name are directly derived from Lee Carleton.

The correct pronunciation of Princess Leia's name is LEE-uh.

32
AT-AT pronunciation
10
What is the difference between the two novelizations of A New Hope?
16
What was Alderaan named after?
8
Is there an in-universe reason how Princess Leia kept herself and her hair so tightly groomed during the events of the Star Wars movies?
3
What's the correct Imperial Military Salute?