Why does the SGC use the iris?

It seems obvious to me that you'd just take a rod or something and stick it in the middle of the Stargate which causes​ no wormhole to be able to form. Why didn't they do this?

While putting a rod or something in the center of the Stargate may or may not prevent people from dialing in (depending on the size and placement, and it's not entirely clear what the requirements are), that's not really the point of the Iris (in fact, it was only a few seasons in that they gave the Iris the ability to stop wormholes from forming at will, by offsetting it... but this is only useful in very rare circumstances), it's to allow both dialing in or out at will, while still being safe from enemies dialing in.

Without the Iris, exploration would be much more difficult, because your teams would only be able to dial in on scheduled intervals. They can't radio in and say, "Hey, take the bar out!" because the bar would prevent the wormhole from forming and thus they couldn't send a radio message through the wormhole.

The Russians and the NID, did, briefly use a system like sort of like this, albeit without physically blocking their gate. When they were running Stargate operations with the second gate, they used the Earth DHD to give that gate temporary primacy, as explained in the episodes Touchstone (NID) and Watergate (Russians)... they would then run teams through and return them at specific predetermined intervals. However, this presented certain problems if the teams ran into unexpected trouble... such teams would have to be considered far more expendable than the SGC usually treats its officers. It also illustrates another (very small) problem with the "block the gate" approach, in that Earth has two Stargates, and if one is blocked, the other one will be accessed by incoming travelers. It's a simple matter to just block both, at least while both are under the control of the same agency, this isn't always the case.

Whatever way you do it, relying on simply making others unable to dial into your gate, except on scheduled occasions, presents certain additional problems aside from the fact that teams can't return if there's unexpected danger. You couldn't have offworld allies contact you through the Stargate with any news or intelligence, for example, and having an alpha site would be complicated, particularly if they were using the same protocol. Having a valid FTL communications system makes it easier, but that isn't an option for several years into the program.

And, in the event that your teams were returning (on schedule, or immediately after arriving on the other world but before you put the bar back in) while under fire (as happens a lot), a disable-the-gate-system does nothing to prevent a wormhole from opening when you THINK it's safe but there are actually significant hostile forces on the other side that could enter before the gate closes, while an Iris allows your team to return if they have the proper code, and immediately after they're through, you can seal off the gate and any subsequent enemies cannot reintegrate (it actually causes losses to the enemy).

If you want to run an off-world operation at all, an Iris is really good to have, and even if you have something that closes off the Stargate completely, you'd probably STILL want an Iris as well. So why not use an Iris? With an Iris up, which happens automatically on unexpected dial-ins at SGC, they are almost perfectly safe from gate-bound attacks, there are only a few instances where lacking the ability to quickly block incoming dial-ins was a problem, and all of them used either particular quirks of how the gate-system worked or what was connected on the other side. And, in all of those cases, having the Iris was still better than having no iris (though the ability to seal the gate would have helped in some).

If you don't want to run off-world operations at all, then yes, you could use a bar, assuming it was large enough to keep the wormhole from forming, or just bury your gate entirely.

Putting an object in the center of a Stargate wouldn't keep it from opening. The object would be vaporized in the vortex, the thing that "flushes sideways".

Anything in caught in the unstable vortex is going to be completely destroyed.

We can see that simply blocking part of the gate isn't enough, because the majority of gates that aren't space gates have some sort of platform that the lower part of the gate is embedded in. That's a much larger piece of mass than a simple rod, and it covers a portion of the inner edge of the wormhole.

This is really notable in the answer given here:

How does the stargate ramp survive the unstable wormhole?

The ramp goes through the gate, but under the kawoosh. The wormhole still opens, the ramp survives.

Here's some more planets with obstructions inside the ring of the gate: 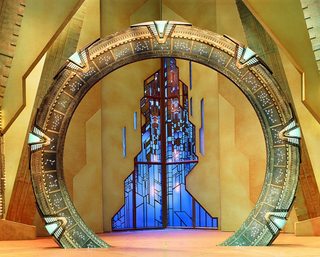 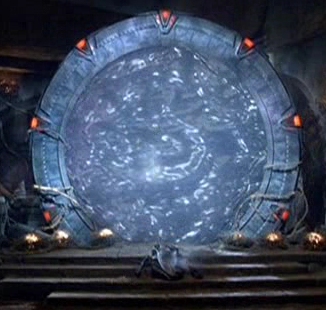 There's many more examples of similar platforms throughout the shows, but no example of a simple, small object blocking the wormhole from forming. There's no reason to believe that would work, or we'd likely have seen that strategy used by allies of the Tauri without the resources to make an iris. For instance, on Abydos they had Daniel bury they gate and have it unburied once a year. It would have been far less work to have just stuck a rod in the middle.

Now, the blockage of the event horizon doesn't have to be 100%, as we can see here: 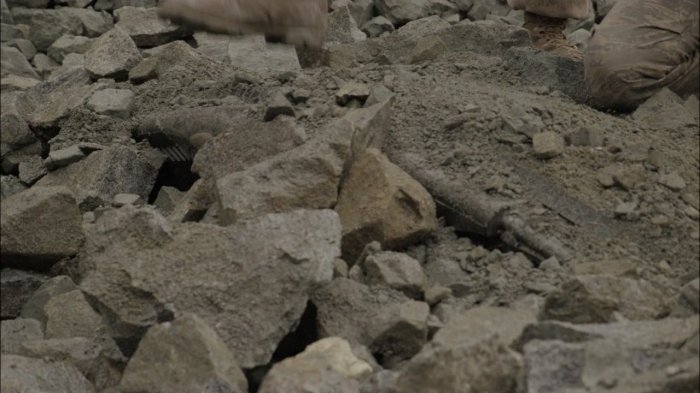 The rubble there isn't tightly packed, so there's very likely pockets of air in the middle.

For more evidence through lack of evidence, there's been enough times that a gate is being dialed in on the receiving end, and the local troops form up around the gate in order to defend it, when they could have just put one of their weapons in the middle to interrupt the dialing process.

A Rod wouldn't stop matter or a wormhole from forming

The point of the Iris is that it is literally microns away from the event horizon. This prevents solid matter from reforming on Earth's end and suppresses the Kawoosh.

One episode of note that demonstrates this exact point is A Hundred Days in which the Stargate gets buried horizontally underground. Because the gate wasn't buried within a few microns of the event horizon, the wormhole established and the Kawoosh dug out a section of the rock immediately above the Stargate. Carter and Teal'c then devised a plan that involved climbing through the wormhole on a rope and taking a particle beam through to cut through the rock, eventually rescuing Jack, who was otherwise stranded on the planet.

20
How does the stargate ramp survive the unstable wormhole?
8
When Sokar was attacking the Earth using the beam, why didn't they obstruct the gate?

45
How does the Iris on the stargate works when establishing a wormhole?
32
Why didn't SG-1 bring more Jaffa weapons back through the stargate?
18
Do Jaffa Staff Weapons Have an Escalating Effect?
34
Where does the iris on the SGC stargate retract to?
35
Why do advanced civilizations in Stargate SG-1 prefer energy weapons?
11
Wouldn't being underwater be the same as burying the gate?
10
Why don't the Goa'uld and Asgard know all the valid stargate addresses?