When does Deadpool figure out he can grow back parts?

In the movie he cuts off his own arm, and at this point he has only been Deadpool for almost a year, yet he still recognizes that he is able to heal from just about anything.

But being able to grow body parts and heal cancer is two different things, when does he realize he can grow back actual parts?

I'm looking for more of a canon answer, I don't think we can figure it out from the movie.

I've cured you Wade. Now your mutated cells can heal anything.

Then, around the 50m 30s mark, we see Wade escape the torture chamber by lighting the oxygen on fire with the match previously obtained. After a short fight with Francis, we see Wade impaled almost through the heart with a large metal rod. Shortly after, as he rises from the ashes, we hear his voiceover saying:

After this, he goes looking for Francis in a white ski mask and jumper, where he gets shot a couple of times, turning nonchalantly toward the shooter. His attitude towards getting shot clearly suggests that he's aware of this outcome, and it doesn't bother him. Due to this, we can assume that he figures it out before this point, likely as he rose from the ashes of the burning building.

Potentially graphic picture below, if you're not ok with it 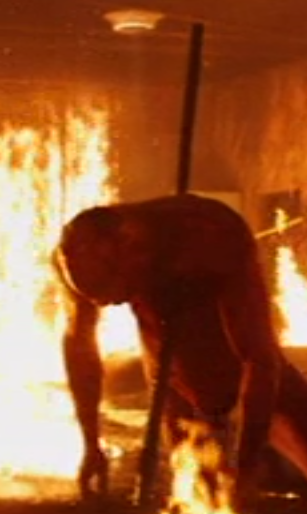 Not the answer you're looking for? Browse other questions tagged marvel comics deadpool or ask your own question.

37
How much of Wolverine has to be left to heal?
20
Why does Deadpool always have a yellow speech bubble?
21
Can Deadpool be killed?
5
Has Dr. Connors ever experimented with mutant DNA instead of lizard?
9
What happens if Deadpool can no longer access food?
14
Can Deadpool drown?
5
Can Deadpool bleed out?
5
When is Wade "Deadpool" Wilson's birthday?