What happened to Loki after he fell from the bridge in Asgard (Thor, 2011)? [duplicate]

After Loki fell from the crystal bridge in Asgard..

in the post-credits of Thor (2011), he was seen in the mirror, apparently possessing Dr. Selvig to gain information on the Tesseract.. 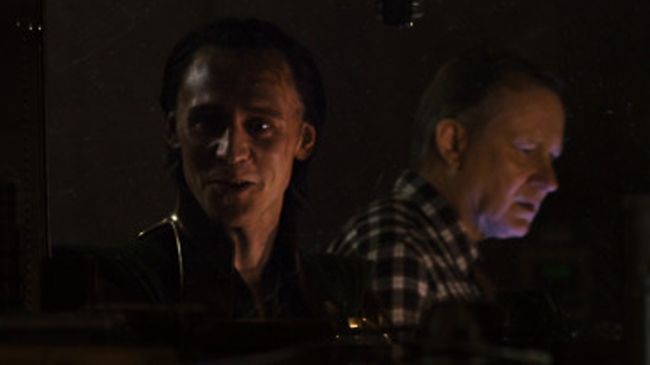 The question is where did Loki end up falling?

After the events in Thor (2011) where Loki fell from the crystal bridge, as mentioned in the MCU wikia,

Loki, devastated by Odin's repudiation of his actions, let go of Thor on purpose and fell into the abyss made by the destruction of the Bifrost Bridge.

He fell to the Wormhole, and..

..arrived in a part of the universe called Sanctuary and met the Mad Titan Thanos, who offered a pact that would allow him to become ruler of the Earth while he would take the Tesseract which was being studied by S.H.I.E.L.D.. Thanos provided Loki with a Scepter with a blue gem which acted as a powerful weapon, and also as a mind control device.

After these follows the events in Marvel's The Avengers (2012).

Source: I wrote several scenes for 2011's Thor, including this one.

Loki - who, even falling to his possible death, still grabs for and catches a symbol of power that he can't even use - deliberately lets go and falls away. And I couldn't stand the idea of him drifting around in space. It's that simple. So I suggested a wormhole, just that he fall away to someplace, anyplace, just not lost and drifting around forever.

Yeah, I worked through a lot of stuff writing it. It was still supposed to be darker; the shot where Thor, after Loki falls, looks up at his father, it was originally supposed to be Odin being more severe, less gentle, making Thor look up and say:

Not the answer you're looking for? Browse other questions tagged marvel-cinematic-universe marvel thor-marvel loki or ask your own question.

28
How does Loki survive his fall at the end of Thor?
12
Where was Loki at the beginning of the Avengers?

12
Why did Loki choose to antagonize Heimdall?
29
Did the Asgardians need the Tesseract to rebuild the Bifrost Bridge?
17
How could Loki have known what Thor said to Odin?
56
What's under the crystal bridge in Asgard?
25
How does the Bifrost still work after the destruction of Asgard?
9
Whereabouts of Odin's spear, Gungnir, after the events of Thor: Ragnarok
5
How did Asgard's army travel to Vanaheim in Thor: The Dark World