Who plays 'Obama' in The End of Time?

In the 2010 Doctor Who special The End of Time, Part 1, the President of the United States makes a minor appearance, as seen in this video:

From his general appearance the actual man (before he turns into just another copy of the Master) is evidently meant to be Barack Obama, presumably the successor to the ill-fated President Winters.

Curiously, this man is not listed on the cast lists for the episodes, either at Wikipedia, TARDIS Wikia, or IMDb. Which begs the question: who played President Obama?

Simple answer is: Nobody knows.

According to Barack Obama's TARDIS wiki page, the stand-in is uncredited and we never see his face in the episode. However, the voice is genuinely Barack Obama's, it's archive sound taken from an older speech of his.

Your only hope of figuring it out is the BTS Doctor Who Confidential for that episode, called Lords and Masters, in which the actor's face can be seen for a fraction of a second after he finishes shaking his head for that scene: 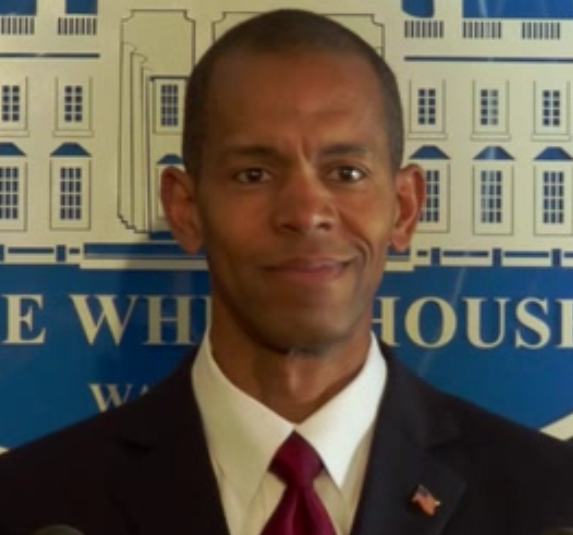 Unfortunately, due to the archive sound, any reference to the character's actor is always labelled as Barack Obama, and not the stand-in. So we may never truly know.

Not the answer you're looking for? Browse other questions tagged doctor-who actors actor-identification or ask your own question.

0
What is the name of this sci fi actor?
10
Who is the lady in The End Of Time?
4
Why didn't Time Lords return in the end of The Time of The Doctor?
11
Who is the FIRST First Doctor?
5
Who was the woman signing books in The End of Time?
5
Did Caitlin Blackwood appear in "The Time of the Doctor"?
2
What song plays in this scene of Doctor Who?
10
Who played the second evil motorcyclist in A-ha's "Take On Me" video?