How many confirmed LGBT characters have appeared in Star Wars materials?

Another casual reference to a minor gay character referred to only as Ledaney appears in the brilliant Star Wars: Bloodline:

“You sure you’re doing okay over there, Seastriker?” shouted Ledaney, who was fixing up his own X-wing a few meters away. “Or do we need to fetch you some soda water and a fan?”

Guffaws echoed from every pilot in the place. Joph had made the mistake of being honest about his reaction to Port in a Storm, which meant he was going to spend the whole day hearing about it from guys who’d never once tried drinking the stuff.

So he shot back, “I’m good, Ledaney. But what about you? Word has it you’ve been hitting the Corellian stuff pretty hard lately.”

This time the laughter was louder. Anybody who didn’t know Ledaney would assume Joph was talking about the famed brandy, but every pilot in the squadron knew Ledaney’s new man was from Corellia.
- Star Wars: Bloodline by Claudia Gray

And unofficial though his statement was, Oscar Isaac attracted attention when he said he played the part of Poe as though Poe was romantically interested in Finn:

Similarly, Mark Hamill said Luke's sexuality is in the eye of the beholder:

“If you think Luke is gay, of course he is."
- Mark Hamill, quoted in Time Magazine

However, Mors, Velus, and Ledaney are canonically LGBT characters, but Luke and Poe's sexual orientations are as yet unknown.

Are there other characters in the franchise who are confirmed to be LGBT?

Note: Although I'm not aware of any pre-Disney LGBT characters, and I'm primarily interested in Disney canon, Legends is acceptable as well.

LGBT representation in Star Wars, as in much “children’s” fiction until recently, has been sparse. Of the many thousands of characters that have appeared in canon and Legends materials, only a handful have been gay or lesbian (far less than the expected proportion), and transgender representation is arguably nonexistent. This article gives a rundown of the LGBT characters that had appeared at the time of writing. Aside from those mentioned in the question, we have several examples:

I am not aware of any definite transgender characters in Star Wars. The article mentioned earlier talks about Reess Kairn, who did indeed change sex. However, since this was done for utilitarian purposes, it is highly uncertain whether Reess’s gender is male or female. Thus Reess cannot be said to definitively count as a transgender character.

Amilyn Holdo from The Last Jedi implied that she could be open to more than just humanoids (and, less explicitly, males).

"A pair of pretty dark eyes." Then Amilyn thought about that for a moment. "Or more than a pair, if you're into Grans. Or Aqualish, or Talz. Or even - "

"That's all right! Leia said through laughter. "It's just humanoid males for me."

"Really? That feels so limiting."

"Thank goodness it's a big galaxy."

Reddit user Bond_SWLibriComics created this helpful guide of every LGBTQIA+ character in the current canon. I'll provide more information below. 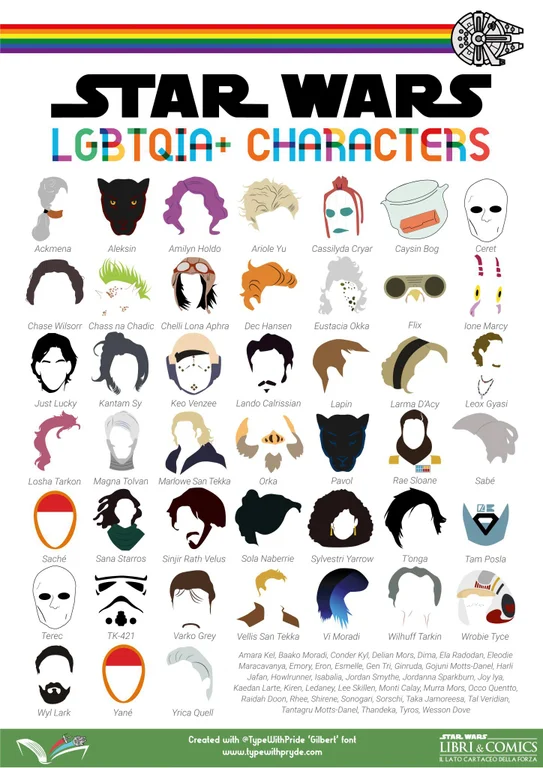 Saché and Yamé, Padmé’s handmaidens as seen in the book ‘Queen’s Shadow’ by E. K. Johnson are in a relationship, meaning they’re either gay, bi, or pan.

In Doctor Aphra: An Audiobook Original when Dr. Aphra, Sana Starros, and Princess Leia are on Sunspot prison Princess Leia says that her first meeting with Sana was "awkward" which Dr. Aphra takes to mean romantically.

Leia: "I brought you on this trip Sana, so we could move beyond the awkwardness of our initial meeting"

Dr. Aphra: "Well that totally made my ears perk up. Was there a connection between the Princess and Sana? I never would have pegged Sana as having a thing for Princesses but then again after all the stuff I subjected her to maybe she decided it would be better to go with someone the complete opposite of her usual type."

Dr. Aphra and Sana Starros have a romantic relationship in college.

Sana Starros to Aphra: "Ok, so. Collandra, Yoshi, who else are you seeing besides me?"

Chelli Lona Aphra: "Darling, I told you its hard to keep track but I've been avoiding Collandra since she started staking out my classes waiting for me to emerge. Such a stalker. Who needs that? And Yoshi came down with the Wookiee flu right after we had our first... uh... encounter."

Yoshi's sex, gender, and species (See Admiral Holdo answer) are not mentioned. It is also not clear if the "Wookiee flu" is capable of infecting multiple species like (or is) the Ardroxian Flu

In fact the whole Dr. Aphra audio book is a recording to her ex-girlfriend Sana Starros

Not the answer you're looking for? Browse other questions tagged star-wars star-wars-legends canon sexuality or ask your own question.

16
How many confirmed kills does Wedge Antilles have?
5
How many people have undergone carbon freezing in Star Wars?

112
How is canonicity of derivative works determined for Star Wars?
10
How many official "Republics" are there in the Star Wars universe?
40
Is there really "No Underwear In Space?"
16
How many confirmed kills does Wedge Antilles have?
5
How many people have undergone carbon freezing in Star Wars?
7
How is electricity produced in star wars?
3
How many Emperors of the Star Wars Galactic Empire were there?
10
How many characters in 'Solo: A Star Wars Story' also appear in other Star Wars canon?
3
How many characters has Warwick Davis played in Star Wars?
9
Why was Poe Dameron re-written to survive in The Force Awakens?