I'm trying to identify a science fiction novel I remember reading as a young kid from my school's library. I only remember two things about it (apart from having a generally positive impression of it):

It would have to have been published before 1985ish. Any thoughts?

Twenty years of searching, I find this site and five minutes later I do some reading here I've got my answer: Creatures of Light and Darkness by Roger Zelazny. I am so happy right now. 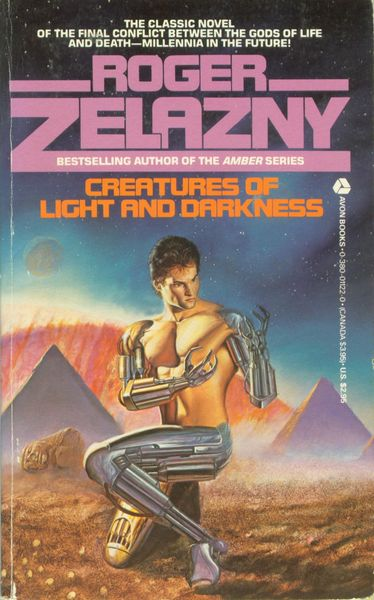 From the TVTropes article:

The Steel General, Wakim, and several other characters practice a martial art known as "Temporal Fugue", which allows the practitioner to project himself backwards through time for a few seconds. A duel between a Fugue master and an ordinary (albeit very powerful) warrior looks thus: "Then, bowing his head slightly, Wakim vanishes from where he stands and Madrak lies upon the ground, his staff broken before him." When two Fugue practioners fight, they both choose advantageous moments to attack and fight simultaneously in many moments during the Fugue interval. Unfortunately, such duels between two practioners can seriously strain the time-space continuum, and can even lead to the destruction of a planet they fight on.

Not the answer you're looking for? Browse other questions tagged story-identification novel time-travel cyborg or ask your own question.

13
Science fiction/fantasy novel about a god returning to Earth to reclaim his powers
6
What's a book series, where they use precise time travel as a method of combat?