Book about a single human growing up on a space station devoted to trade?

I've been flailing around trying to find this book I read decades ago. I'm pretty sure it was from the 60s or 70s.

It's about a single human growing up on a space station full of alien races, devoted to trade. He's raised by an alien, but is poor and has to live at the fringes of society.

The station in centuries old, and just about all war has been abolished as it's been replaced with trade. Aliens would prefer to sell things to each other than kill each other.

There's murder attempts against the human, but by the end of the story he's a useful member of the station and ends up saving the station from some disaster.

Humans show up in a generational ship and he ends up falling in love with one of the members of the ship. I seem to remember something about flying through a debris field, and I seem to remember that somebody attempts to attack the station and/or the human ship, the human saves the day, and the attacking aliens get trashed for breaking the peace.

It suddenly came to me in a flash. Putting it here in case I forget again. 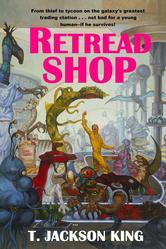 Not the answer you're looking for? Browse other questions tagged story-identification novel space-station or ask your own question.

11
Accident on space station orbiting pulsar kills human crew but cat survives it
17
Trying to remember a book about a human male travelling to alien planet
12
Book Name: Space Operaish
8
SF novel -- the only human on a space station full of aliens
13
SF novel - Space adventure with a single human traveling the galaxy looking for answers