What was the point to J doing a Time Jump when fighting Boris?

When J is fighting Boris he looks at his watch before charging at Boris, letting himself get hit. it appears that he was trying to remember where Boris shot (Left, Right, Left) before he grabs Boris and throws himself and Boris off the top of the Launch Tower allowing him to redo it by doing a Time Jump.

The second time however Boris shoots in a different order, it's Right, Left, Left. not to mention he also got off a forth shot and it doesn't seem as if Boris did the Time Jump aswell

So what was the point to this Time Jump if Boris attacked different?

Where did he get hit the first time around?

Boris fires three shots. They hit J in the right upper pectoral, left lower pectoral and the left side of his abdomen. As each shot hits him, he calls them 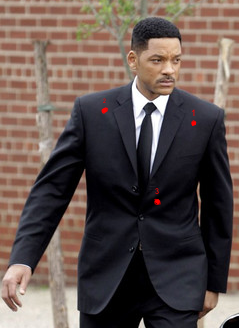 The second time around, Boris fires four shots, not three. J ducks under the shot that would have hit him in the right pectoral, then spins to the left to avoid the second, third and fourth shot.

Where would they have hit him the second time around? 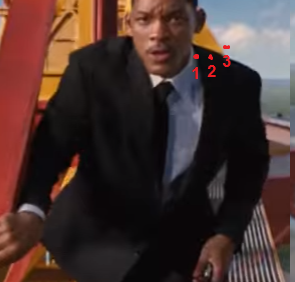 So what was the point?

Only the first shot was in approximately the same location. The other shots were in completely different locations and the third and fourth shot would have missed entirely if J hadn't already changed the timeline. Not only that, but his description of the shots ("right, left, left, right") is actually in a different order than we see the first time around.

The best explanation is that J was anticipating going around again and that he's trying to remember what order Boris would fire his shots if J ducked the first one.

Not the answer you're looking for? Browse other questions tagged men-in-black-3 or ask your own question.

10
How was J recognised as a MiB agent when K wasn't alive to recruit J?
11
Why doesn't K remember that J was in the past with him?
12
Why was Jeffrey Price able to remember sending Boris back in time?
3
What happens when more than one person with the same initials joins the Men in Black?