A series of stories took place on a colony world where they thought it was a good idea to store DNA sequences of multiple other species inside a small number of living examples. However, normal mutations messed it up and environmental factors can make a life form express unusual chimeric traits or reproduce as completely different species, even across kingdoms such as bugs coming from plants.

The main protagonist is a mature woman I think, who enjoys red kangaroo tail meat.

The stories involve the bizarre transformations and figuring out the factor causing it, at least as one plot element.

Any idea what story series and author that was?

I think this may be Mirabile by Janet Kagan. 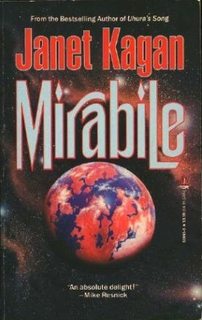 On the distant planet of Mirabile, a settlement of human colonists from Earth is jeopardized by genetic mutants of Earth plants and animals, and it is up to ecological troubleshooter Mama Jason to destroy the menacing mutants.

As I recall, the colony ship carried a large number of earth life forms that have been modified to include genetic coding for other species - this coding activates due to environmental conditions and flowers can produce bees, etc.