Why did Batman do so much better in his second fight with Bane?

In The Dark Knight Rises, Batman's first encounter with Bane goes rather badly.

In short, Batman gets utterly destroyed, and does no apparent damage to Bane.

Later, they meet again, and Batman manages to hold his own, and even come out ahead until Talia intervenes. Bane's skills have deteriorated so thoroughly that he spends a good second or two punching a pillar where Batman used to be.

Batman still doesn't look good, but he gets the job done.

Is the disparity between these two performances from Batman entirely the result of the fact that he broke Bane's mask in the second fight, or is there something else going on here?

The first fight is an ambush set up by Bane. He set the time, and the place. He knows things about Batman that Batman did not think he knew - that he is Bruce Wayne for example, off the bat (I would say that pun is unintentional, but I'd be lying). Batman is mentally thrown off. His tricks don't work:

Theatricality and deception are powerful agents to the uninitiated... but we are initiated, aren't we Bruce? Members of the League of Shadows!
....

Oh, you think darkness is your ally. But you merely adopted the dark; I was born in it, moulded by it. I didn't see the light until I was already a man, by then it was nothing to me but BLINDING!

There's also the discussion with Alfred that occurs earlier in the movie:

The Batman in the second fight turns up at Gotham, and Bane is completely blindsided - "I broke you". This time he's not thinking clearly, and as the fight goes on, Batman manages to trigger his rage. That punching the pillar scene isn't a loss of "skill"; it's a disoriented, extremely violent ball of rage punching with extreme strength as Batman is focused on staying out of the way of those fists. Bane's also distracted elsewhere - the vehicle with the nuke is the important part of his plan, and there's a strong sense that he means to be consumed by the nuke as well.

Batman has changed also - previously, even if he wasn't suicidal, his entire thing was about not fearing death. He has now learned a lesson about using his own fear to empower himself.

And so, the tables have turned.

In his first fight with Bane, 1) Batman subconsciously wants to die, and 2) Bane is more motivated.

Others have noted some of the tactical reasons why Batman lost the first fight and won the second. That's definitely part of it, but I'm going to argue for a more fundamental reason.

At the beginning of the film, Gotham is at a point where it apparently does not need Batman (the Dent Act led to the end of organized crime in that city). That is what Bruce wanted, since if he could stop being Batman he could pursue a relationship with the woman he loves, Rachel. With Rachel's death, he no longer has a reason to not be Batman, but Gotham also does not need Batman (at least it appears this way at the beginning of the film).

Given those things, Bruce no longer has a sense of purpose, which is evidenced by his reclusiveness and neglect of Wayne Enterprises.

Bane's emergence seems to give Bruce a reason to be Batman again, but he doesn't have an "exit plan," as his did before.

WAYNE: Rachel died knowing we'd decided to be together. That was my life beyond this cave and I can't just move on. She didn't. She couldn't.

Alfred also worries about this:

WAYNE: That's what you're afraid of - that if I go back out there I'll fail.

ALFRED: No. I'm afraid that you want to.

So, my theory is that Bruce subconsciously wants to die. I don't think that he wants Bane specifically to kill him, but he's okay with being killed as Batman in one way or another. Bane even notes this:

BANE: You don't fear death. You welcome it. Your punishment is to be more severe.

After Bruce loses to Bane and is in prison, he is annoyed by the fact that he wasn't killed. He asks Bane:

WAYNE: Why didn't you just kill me?

He even asks the other prisoners to kill him:

PRISONER: He asks if you would pay us to let you die. I told him you have nothing.

WAYNE: Do it for the pleasure.

At this point in the film he really wishes he would have just been killed in his fight with Bane.

So that explains the first part of the question.

As to the second part...

Batman wins the second fight because 1) he learns to fear death, 2) his desire to save Gotham as Batman is rekindled, 3) "falling" and "rising again" made him stronger.

In prison, the TV images of what's occurring in Gotham motivate Bruce to recover from his injuries and train. He's noticeably more driven than before. He sees Ra's al Ghul in a hallucination, who taunts him about his failure to save Gotham. This gives him additional motivation and purpose:

PRISONER: Why build yourself?

WAYNE: I'm not meant to die in here.

The film makes it clear that Bruce needs to learn to fear death. Batman can't make the "jump" without fear. With the safety rope, he doesn't have the appropriate fear of death. Without it, he does have the right amount of fear, which motivates him to make the jump.

WAYNE: I do fear death. I fear dying in here while my city burns with no one there to save it.

Presumably this fear of death, his anger over what Bane did to Gotham, and his training let Bruce beat Bane the second time around.

A big influence on the Nolan trilogy is The Dark Knight Returns and this battle looks highly influenced by Batman's fights with the mutant leader.

The mutant leader has similar physical attributes to Bane, he's younger, stronger, fitter, and has a driven savagery:

and indeed Batman comes off rather badly after their first fight:

Later Batman rematches with the mutant leader, having taken stock of the situation.

My mistake was to try to match his savagery

He had tried to fight the mutant leader (as he did with Bane) as a straight one-on-one, where Bane had the advantage of youth, strength and drive.

This time though Batman uses his experience, and his skills, as we can see in the question above neatly avoiding Bane's attacks, wearing him down.

Eventually having worn him down he can take him on straight, to a win this time 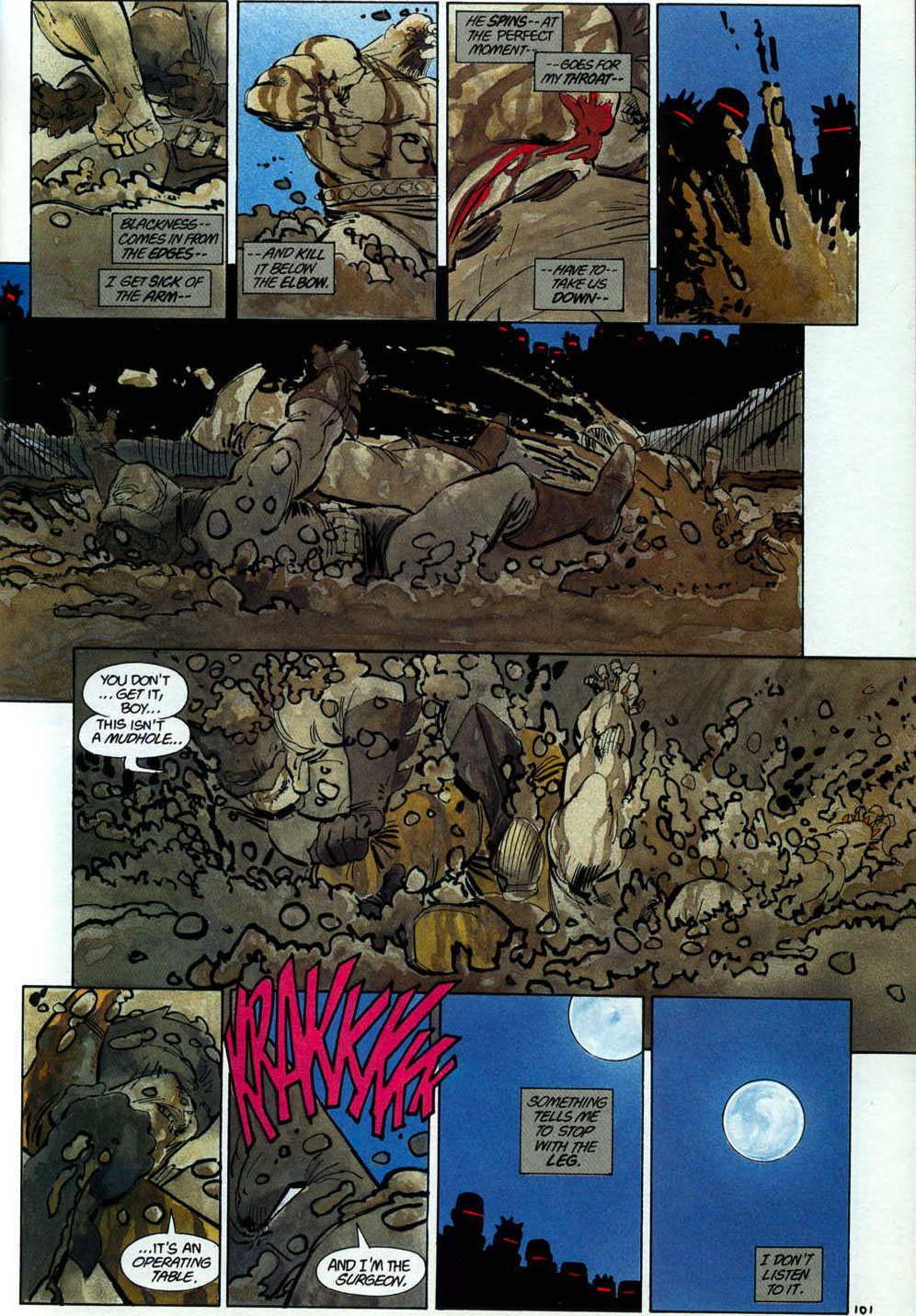 Of course in the Dark Knight Rises, Miranda intercedes, but you get the idea.

Is the disparity between these two performances from Batman entirely the result of the fact that he broke Bane's mask in the second fight, or is there something else going on here?

Indeed, it is breaking the mask because Bane was vastly superior. Your video of the second fight is highly misleading because it is already near the end of the fight.

Bane attacks with straight punch slightly from above.
Batman blocks the punch down with both hands and counterattacks with moving both arms up. No reaction from Bane.
Bane connects with a strong left hook.
Bane continues with a vicious right punch, Batman staggers.
Bane lands another punch with the left hand, Batman staggers back.

Bane catches the left arm and both are going into a contest of strength which goes on for some time.

Until now Bane has hit Batman 11 times, Batman has only achieved one hit and it did not show any effect so far. Bane is vastly superior.

Now the key scene: Batman is able to break the fist lock by moving the arm down and finally connects with a surprise punch right into Bane's mask.

Bane is surprised and for a moment stunned.
Batman lands a second strong hit on Bane's mask with the left hand.
Batman uses his chance and connect with a third hit to Bane's mask.
Batman connects with the left elbow, Bane goes down. Batman holds Bane's head in a arm lock with the left arm.
Bane punches Batman with his head into the upper torso.
Batman goes back, Bane moves an idiot in his path out of the way.
Bane attacks with a weak left, Batman blocks and lands two terrific blows with the left and the right, the mask audibly snaps.
Bane holds a moment and the first time his look says: "Oh crap!"
Batman tries to go into the clinch, Bane throws him back and frantically tries to fix the mask.
Batman attacks and Bane hits him with an outward punch with the right, throwing Batman back.
Bane attacks Batman with the right, Batman blocks it.

Now Bane realizes that he needs to go to full attack and dishes out uncontrolled, vicious punches to put Batman down. This is the scene in the shown video.

It is now evident that the control and the agility of Bane had suffered greatly, he attacks 6 times and Batman easily dodges the blows and hits Bane again with two powerful blows on the mask.
Bane attacks and misses two times, Batman diverts the third blow, attacks with the right, Bane blocks, Batman puts Bane's defense down.
Again Batman hits Bane two times on his mask and kicks him into the hall.

So the story is: yes, only the lucky hit on the mask put Bane on the defensive, before that he acted exactly like the first time: as unstoppable juggernaut.

Talia obviously knew Batman was going to meet Bane that night (their first fight): she and Bane were partners and in communication with each other, and an important part of their plan would be to eliminate Batman as a threat, so she would be aware of the trap Bane was setting. It's probably not coincidental that she chose that time to seduce Bruce; she was trying to deplete him of as much energy as she could so he'd be exhausted later when fighting Bane. (This is in addition to all the factors mentioned in the other answers.)

Another factor is simply because he feared the bat. When he saw the bat logo burned on the bridge, he was terrified of the man he dealt with.

Not the answer you're looking for? Browse other questions tagged dc batman nolan-batman-trilogy the-dark-knight-rises bane or ask your own question.

26
Why did Bruce Wayne have sex with this character?
18
Why did Blake draw the Batman symbol on things?
4
When do Batman and Bane first fight?
5
Why didn't Batman take the antidote with him when going to Arkham for Rachel?
10
How much property damage did Batman commit while evading the GCPD?
3
What did Batman do to the first tumbler, and why didn't he do it to the other one?
15
Do the events of The Dark Knight Rises prove Joker was right?