Why didn't the crew see the waves as they descended onto Miller's planet?

While it was an awesome scene, I have to wonder about the realism of the dramatic moment where Cooper says Those aren't mountains and then it dawns on him to look behind them and he sees the second wave looming over them, noticing it for the first time.

How could they possibly not have seen that as they were descending?

They did indeed see them on their way down, but they were in such a hurry (attempting to remain on the planet for as short a time as possible) that they didn't realise that the "mountains" were moving, nor have time to conduct even a cursory examination of the surroundings.

Amelia looked in the direction the robot indicated. The water stretched out to the horizon, where it met a mountain range, misty with distance; one long ridge that vanished in each direction. The sight of the alien skyline arrested her for a moment, and she wished they weren’t in such a hurry. She had long dreamt of her first moments on an extra-solar planet, and this wasn’t how it was supposed to go. There should be a little ceremony, a little “That’s one small step.”

Instead they were in this tearing hurry, and it felt completely half-assed. But it was what it was. They weren’t here to set up flags and take pictures.

As far as what they could see from orbit, in the movie the waves look an awful lot like mountain ranges. 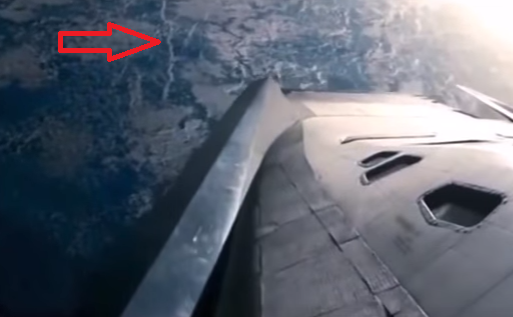 The script also indicates that at the point at which they could have probably spotted that the mountains were fluid, they passed through a cloud layer and were otherwise distracted.

The Ranger CUTS through cloud formations, BURSTING out into

Actually, the pilots could have seen the giant wave as they were descending, twice really. When Cooper says,

I'm gonna spiral down on top of it

(referring to the location of the beacon), if you slow the movie down & pause it, you will see the exterior of the ship/Ranger is seen & in the distance, past the exterior of the ship you CAN see the giant wave. I guess they were more intent on landing the ship "in one piece" (Dr. Brand's words), but did not take notice of the planet's activity. We have to remember their highest priorities were safety, saving fuel, spending less time on the planet & finding the downed beacon. Another question is why didn't Dr. Brand notice something suspicious about the "mountains" as she got off the Ranger? Why didn't anyone notice earlier that the "mountains" are getting closer?