What is Bane's ethnicity in The Dark Knight Rises?

In the Knightfall series of comics, Bane is a Central American of a possibly mixed ethnicity (see here).

In The Dark Knight Rises, it is more ambiguous — Alfred, having researched Bane, mentions that Bane spent time in a prison in an "older part of the world".

Bane himself speaks English in a roughly English accent, albeit muffled. 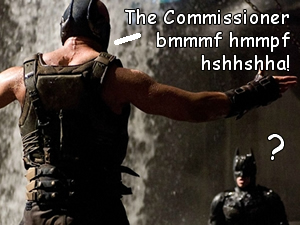 In the Nolan trilogy, what is Bane's ethnicity?

Are there any authoritative statements on this?

Note: The location of the prison may be significant in arriving at an answer, but the location alone is not enough to form a conclusion.

According to statements by Tom Hardy, reported by MTV, his version of Bane was intended to be of Romani heritage:

"There's the history of [Bane] being Latino and speaking Spanish and all the stuff like that, so I went for Romani Gypsy instead of Latin, but I went lateral myself," [Hardy] said. "If that upsets people ... I hope it doesn't. There were a lot of conscious choices made around him to benefit both the fans and new people."

This mildly conflicts with other statements made by Hardy, particularly that he based Bane's accent on Bartley Gorman, a Welsh-Irish bare-knuckle boxer:

As Hardy notes, Gorman was an Irish Traveller, not a Romani gypsy; a relation between the two is not impossible, but is disputed.

The Romani origin is more consistent with Bane's incarceration; although the exact location of the prison is unknown, it's presumed to be in North Africa, and is clearly not in the British Isles, where the Irish Travellers primarily reside.

14
Is there any evidence that Bane is Hispanic?