As Goliath, did Clint Barton ever take advantage of his Hawkeye skills?

In my quest to read all Hulk comics, I recently read Avengers #88 and Sub-Mariner #35.

In both these comics, Clint Barton makes an appearance as Goliath. This is the same Clint Barton better known as Hawkeye. I did a bit of research, and found that he decided to start using Pym particles as Goliath so that he could still rescue Black Widow after his bow was broken in a crash in Avengers #63.

I don't know how long he continued as Goliath, but it was at least these 25 issues. Although Barton is a good tactician and has hand-to-hand training from Captain America, the main things he brings to the table are nearly superhuman perception and accuracy. It would seem strange for him to just throw out those abilities.

So, as Goliath, was Barton still able to take advantage of his Hawkeye abilities? Did he make a habit of shooting or throwing things with extreme accuracy?

I'd accept a specific example, or indications of a general trend.

He did, in fact, in Avengers #65, "The Swordsman Strikes!" where he cobbled together a giant makeshift bow and arrow out of some construction materials while fighting Swordsman. 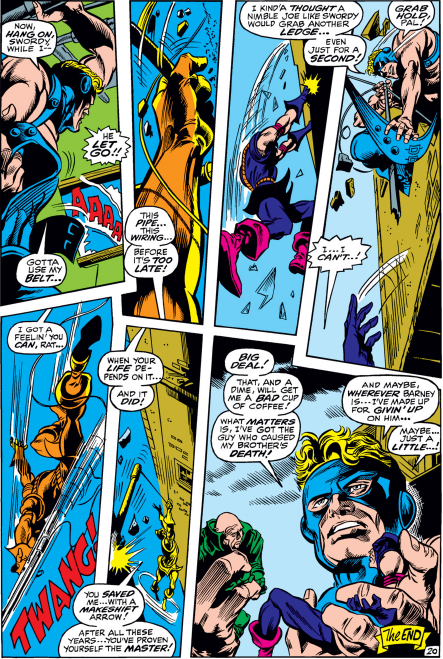 Not the answer you're looking for? Browse other questions tagged marvel hawkeye or ask your own question.

24
How could agent Clint Barton (Hawkeye) function while on the SHIELD Helicarrier deck at 30,000 feet?
25
Are S.H.I.E.L.D. agents (e.g. Clint Barton, Natasha Romanov) ever referred to by their comics aliases?
8
How/when did Clint Barton and Natasha Romanov become friends?
12
Does Rogue ever take advantage of the removable power suppression we see?
5
Did Tony Stark ever show any CEO-level communication skills at any point in the MCU?
23
In this drawing of the Avengers, who's the guy on the right?