Do the events of The Dark Knight Rises prove Joker was right?

In The Dark Knight, the Joker adamantly believes that Gotham is only holding itself together because of the laws imposed on them or because of Batman:

You see, their morals, their code, it's a bad joke. Dropped at the first sign of trouble. They're only as good as the world allows them to be. I'll show you. When the chips are down, these... these civilized people, they'll eat each other.

Introduce a little anarchy. Upset the established order, and everything becomes chaos. I'm an agent of chaos.

I just did what I do best. I took your little plan and I turned it on itself. Look what I did to this city with a few drums of gas and a couple of bullets. Hmmm? You know... You know what I've noticed? Nobody panics when things go "according to plan." Even if the plan is horrifying!

And so forth, plus the various social experiments used on Gotham.

At the end of the film, we get the following exchange:

The Joker: We really should stop this fighting, otherwise we'll miss the fireworks!

Batman: There won't be any fireworks!

[Silence. Nothing happens. Confused, Joker turns to look at the clock, which shows that it's past midnight and neither ferry has blown the other up]

Batman: What were you trying to prove? That deep down, everyone's as ugly as you? You're alone!

In short, The Joker was wrong, Batman was right, Gotham is still worth defending, human will triumphs. All well and good.

What confuses me is that The Dark Knight Rises seems to prove time and again that The Joker was 100% correct. The second the police and Batman are unable to defend Gotham, the people literally stage a cheap French revolution and overthrow what little order the city has, and had Bruce not been destitute and kidnapped he would have been thrown out or killed along with everybody else. Within a month they've developed a cartoonish parody of a courtroom in which citizens are literally tried and executed exclusively because they were on the side of law and order, all while the downtrodden people of Gotham cheer them on. Basically validating everything The Joker said about their morals and laws getting cast away in an instant when their order gets disrupted by Bane, up to and including the quotes provided.

Was The Dark Knight Rises intended to show that The Joker was right?

No. The situation in Gotham was the result of a conspiracy by Batman and Commissioner Gordon to conceal the truth.

One of the central ideas in The Dark Knight Rises is that the peace and prosperity that Gotham enjoys at the beginning of the film were bought with a lie. Batman and Commissioner Gordon agreed at the end of The Dark Knight to conceal Harvey Dent's murderous actions as Two-Face, with Batman taking the blame.

This allowed for the passing of the Dent Act, which denied parole for over 1000 criminals convicted during and after the events of The Dark Knight. The fact that Dent was seen as a "White Knight" with "no dirt on him" (to quote Mayor Garcia's warning from TDK) and who then subsequently died as a martyr for justice is what permitted such a sweeping act to be passed.

What The Dark Knight Rises shows is not the inherent ugliness in people that the Joker believes in, but rather a reactionary ugliness when liberties are suppressed by those with power. Bane was able to incite a mass hatred towards the upper crust of Gotham by revealing that Gordon had lied to the public by covering up the crimes committed by a city official and thereby denied many citizens the right to a fair and just process.

BANE: Behind you is a symbol of oppression. Blackgate Prison, where a thousand men have languished under the name of this man...Harvey Dent, who has been held up to you as the shining example of justice! 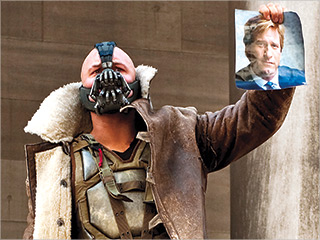 The mobs had identified Gordon and Dent with a generalized ruling class of officials, bureaucrats, and industrialists who all deserved to be punished for a crime perceived to be committed against the common person.

The Joker did not win. It's Batman and Gordon who defeated themselves, which gives extra meaning to Bane's accusation:

Victory has defeated you.

The second the police and Batman are unable to defend Gotham, the people literally stage a cheap French revolution and overthrow what little order the city has... Within a month they've developed a cartoonish parody of a courtroom in which citizens are literally tried and executed exclusively because they were on the side of law and order, all while the downtrodden people of Gotham cheer them on.

I don’t think the downtrodden people of Gotham do cheer them on — it’s Bane’s League of Shadows terrorist foot soldiers, with their ranks swelled with the prisoners released from Blackgate bitter about the Dent Act, who do the cheering.

The regular people are just trapped in the same place, and kept in line by Bane’s army, the lack of escape routes, and the nuclear bomb being driven around the place.

Not the answer you're looking for? Browse other questions tagged dc nolan-batman-trilogy the-dark-knight-rises the-dark-knight or ask your own question.