My recollection is very sketchy but this is what I remember....

That's all I have to go on, sorry.

Another possibility is the 1984 Polish film, Sexmission (Seksmisja in Polish). It involves a female-dominated society who reproduces via parthenogenesis and there is time travel of the forward variety. Moreover, it was originally in Polish (which is a Slavic tongue much like Russian) and it did have a release in Russia (as Новые амазонки). However, there is no space travel involved. 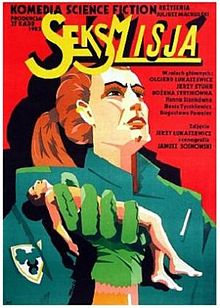 The two protagonists, Max and Albert, played by Jerzy Stuhr and Olgierd Łukaszewicz, respectively, submit themselves in 1991 to the first human hibernation experiment. Instead of being awakened a few years later as planned, they wake up in the year 2044, in a post-nuclear world. By then, humans have retreated to underground living facilities, and, as a result of subjection to a specific kind of radiation, all males have died out. Women reproduce through parthenogenesis, living in an oppressive feminist society, where the apparatchiks teach that women suffered under males until males were removed from the world.

Indeed, that is not much to go on. Cat-Women of the Moon is about a pair of astronauts encountering a society of only women and it was indeed black-and-white, and most of them are none too happy about men. However, it's the moon, no time travel, and it was originally in English although I'm sure someone has translated it into Russian at some point. 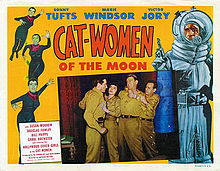 An expedition to the Moon encounters a race of "Cat-Women", the last eight survivors of a 2-million-year-old civilization, deep within a cave where they have managed to maintain the remnants of a breathable atmosphere that once covered the Moon. The remaining air will soon be gone, and they must leave if they are to survive. They plan to steal the expedition's spaceship and migrate to Earth.

There were a number of films very similar to this one released at this time, including one explicit remake, Missile to the Moon.

10
Pre-90s anime with a red-haired man in an outer space war shot at the ending
5
Movie identification:scientists study a flying saucer and try to make it fly (70s or early 80s)
1
Need help identifying 80's Scifi movie
10
Need help identifying a movie with struggling werewolf protagonist
9
'80s or '90s book about a world where society is beginning to break down due to mass infertility
7
Help identifying a martial arts movie with supernatural elements
3
80s or 90s cartoon series - Female protagonist has a large cat as a pet and collects crystals or gems