In Half Life 2, why is the game logo the symbol of the resistance?

In Half Life 1, the reasoning for the game logo makes sense: the whole storyline is sparked by a high-energy particle experiment gone wrong. Thus, the lambda is the out-of-universe game logo.

The story of Half Life 2 revolves around a grassroots resistance against an oppressive alien regime. There are moments of particle physics, but these are entirely in the hands of a few scientists. Most of the resistance uses plain slug-throwers and guerilla tactics.

So, in the Half Life 2 universe, why do these normal resistance fighters use a symbol from particle physics to represent themselves?

The symbol was not only the game-logo in the first game either. In fact it makes various appearances in Black Mesa, first and foremost on Gordon Freeman's HEV suit itself. But there's also the Lambda Complex that Gordon enters later on (from where he gets teleported to Xen), that employs this symbol as its logo, too. 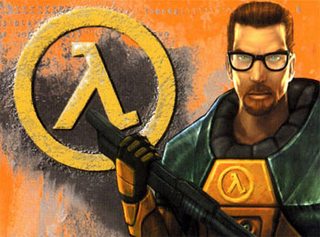 If we then set this in relation to the somewhat legendary meaning that Black Mesa, and Gordon's adventures there, have for the whole ideology of the Resistance, it seems to be a reasonable choice, or at least within the bounds of plausibility. (Even if the most important reason would probably still be the out-of-universe one of a recurring trademark and symbol of identification for the player and the game in unison).

Those points are also reinforced by the Half-Life Wiki, but they're not beyond reasonable deduction in the first place:

In the original Half-Life, Gordon Freeman's trademark HEV Suit was marked with a Lambda Logo on the chest, as were other HEV Suits. A section of Black Mesa dedicated to teleport research was also called the "Lambda Complex," and is identifiable by the Lambda logo at its entrance...

Gordon's Lambda logo on his suit and the work of the Lambda Complex became something of a legendary trademark symbol for the Resistance against the Combine, referring to the acts of Gordon Freeman during the Black Mesa Incident.

Not the answer you're looking for? Browse other questions tagged video-games half-life or ask your own question.

15
Why is Gordon Freeman recognized as a legendary hero in Half Life 2?

10
Are the Half-Life 2 Antlions a Starship Troopers reference?
30
What is the link between the Portal series and Half-Life series?
8
What was the time span over which the events in Half Life took place?
18
Was Half Life 1 inspired by HP Lovecraft's "Fungi from Yuggoth"?
15
Why is Gordon Freeman recognized as a legendary hero in Half Life 2?
3
What are the dimensions of a Combine synth gunship from Half Life 2?
5
In Half-Life 2, how many people would fit in Combine Dropship's Troop container?
35
Why are Vortigaunts violent in Half Life 1, but peaceful in Half Life 2?
11
Was there any intentional meaning behind Gordon Freeman's surname?