Can anyone help to find the exact title and author of a novel I read in 1972? It was checked out of a library, and I believe it was a new release at the time, though I may be wrong about that. I remember the title being Echo Death, but have had no luck finding a book by that title. The story line was about a man with the innate ability to teleport. He was acting as a eco-warrior type character fighting against the "establishment" in a dystopian future world in ecological disaster. There was a antagonist hunting him who also had the ability to teleport. In the end, the protagonist realizes that he had a death experience years before and that his ability to teleport allowed him to jump from it.

An ecoescape story about Watkins and Snyder (when they weren't writing this book) who both can "Jump" into time. Watkins has lost his wife and child to the poison bloom of one Ashley's firm and is determined to get him; Ashley hires Snyder to kill Watkins, but before they're through Jumping through time and space, they're collaborating as they did at the typewriter. 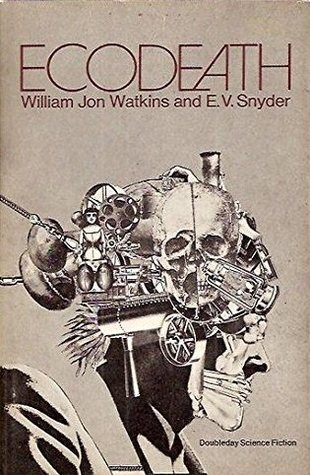 Not the answer you're looking for? Browse other questions tagged story-identification novel science teleportation or ask your own question.

16
Trying to remember a fantasy novel with a fighter/thief female couple and an “X and Y” title
19
Film about dystopian royalty in an alternate universe
17
Tracking down a very obscure novel about dystopian USA
11
Black&white TV show about fantasy mansion
15
Old SF novel about a white-haired young woman, alien or half-alien, who tutors human kids
4
Science fiction book about an alien boy with two hearts
13
Possible Eco thriller, man invents a device to remove rain from glass
4
Fiction book about computers, bugs and maybe wiccan?