Was the land area of Beleriand of greater size than that of the known regions of Middle-earth in the 2nd and 3rd Age?

From the following map, which was made by combining Tolkien's map of Beleriand with that of the western part of Middle-earth as it was in the Third Age, we can see that Beleriand was vast - roughly similar in size to the part of Middle-earth that we are familiar with (Eriador, Rhovanion and the regions that would later be known as Gondor and Mordor). The mountain range in the centre of the map is the Ered Luin, or Blue Mountains, which gives us a way to fit both maps together. The cataclysm at the end of the First Age must have been terrifying. It resulted in the loss of most of the landmass of Beleriand (except the small easternmost part which became Lindon and several isolated highland areas which became islands) and countless lives besides. It must also have had a great effect on the regional climate.

It is important to remember though, that Middle-earth stretched much further to the east. Tolkien never drew any maps to show the eastern extent of Middle-earth, save for a very early rough sketch that was not to scale.

I believe the answer is no, Beleriand was not as large as the other areas of Middle-earth. As @maksim shows in his answer, the illustration from Karen Wynn Fonstad's Atlas of Middle Earth, published in 1981, gives a pretty accurate relative sizing of the two areas. I believe the common approach these days is to combine the maps based on the two common items in the maps, Tol Fuin (the remains of Taur-nu-Fuin) and Tol Himling (the remains of the Hill of Himring) to establish a common scale. That results in an image that puts Beleriand at a smaller size than the currently accepted answer.

However, as @Edlothiad points out the difficulty in combining the maps is that one is a flat Earth and one is spherical, and there's really not much we can do about that. I created an iOS app that combined the two and wrapped them around a spherical world. This is the mercator representation of that. 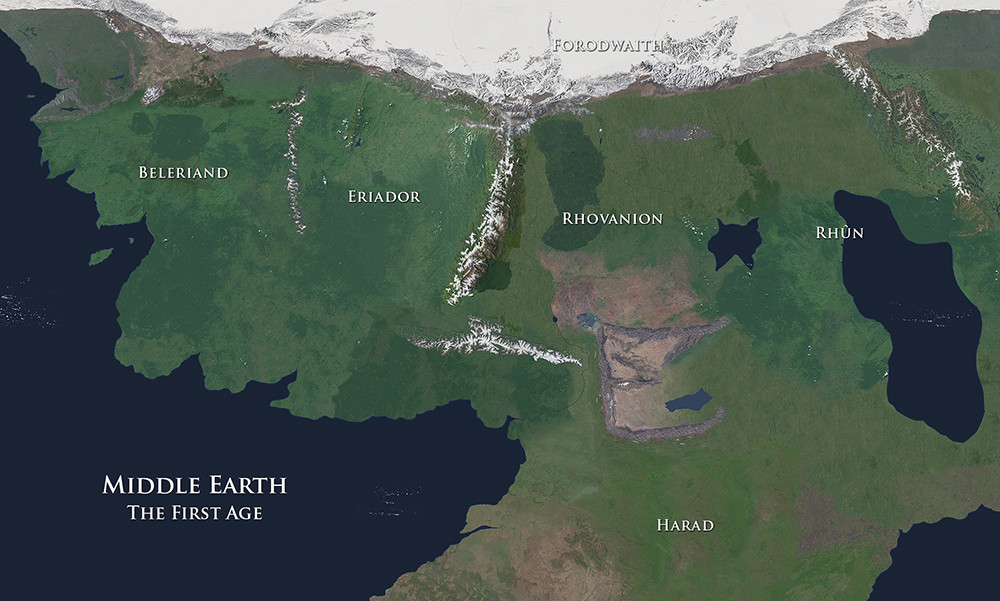 Also, it's important to remember that areas to the north, south and east of the maps in The Lord of the Rings and The Silmarillion as shown in this illustration are non-canon.

Beleriand certainly wasn't bigger than the Second/Third Age Middle-Earth, as it was the land that extended west from Ered Luin (the Blue Mountains). The exact relative size depends on which map you're looking at, but for me the "Atlas of Middle-Earth" provides the most well-researched result: http://corecanvas.s3.amazonaws.com/theonering-0188db0e/gallery/original/first_age_of_arda.gif

I'd say Beleriand was comparable in size with Eriador (the land between Ered Luin and the Misty Mountains), maybe slightly bigger.

The proportions are off. I used Dorthonion (Taur-nu-Fuin) for reference, which is described as being 60 leagues (approximately 180 miles) east-west. Using the map of Eriador, which has a scale, I measured distances between various landmarks to find one that is 180 miles. One of these is the length of the Gulf of Lhune (mouth of the Gulf to Grey Havens), another is the the distance from the beginning of the small river that flows east from Ered Luin to the beginning of the river that flows West from Hills of Evendium (both rivers connect to River Lhun) and another is the distance from Rivendell to the edge of Mirkwood east of the Old Ford. The originally posted map has Dorthonion roughly 3/4 the size of Eriador, which would make it roughly 500 miles wide rather than 180. Beleriand was very roughly the size of Eriador.