Was Krall's suit the source of his ability?

to extend his life by taking life force from other beings.

As I watched the film, it seemed that this ability was tied to his suit. The suit was very particular, and had many shots dedicated to showing its details, such as the whirring gears. When his power was used, it seemed to be channeled through the suit.

Other characters may have had a similar ability, but we didn't see them use it in the film and they didn't seem to suffer from the adverse affects that Krall did

where he seemed to age strangely throughout the film, even after taking victims. The other two, which seemed to be the same "species", didn't age at all, one way or another.

So, was his suit the source of this technology, or something else?

Yes, it seems so.

Krall explains that the original inhabitants of the planet left behind "technology" for extending life. Having seen the film twice now, I can say that it does seem that his suit contains this technology.

For starters, Krall, Manas and Kalara

were the three survivors of the crashed USS Franklin,

and so Manas and Kalara also needed to extend their lives unnaturally using the alien technology. As you point out, we do not seem them wearing suits exactly like Krall's.

In Kalara's case, almost until the moment of her death she was trying to maintain the cover that she was a scientist with no association to Krall or his drone force, and so she wore a distinct, non-mechanical jumpsuit that reflected this.

In Manas' case, his suit has more in common with Krall's upon further inspection that would seem so at first glance. First of all, Krall's suit has a series of gears located on the shoulders, elbows, wrists, waist, and in some other places. These gears seem to be involved in the life-energy draining process. We see this most clearly when Krall begins to drain Sulu's life energy — the gears go from being inanimate to whirring quickly in unison. I would say this is the best evidence that the suit contains the life extension technology.

You can see some of the gears in this screenshot: 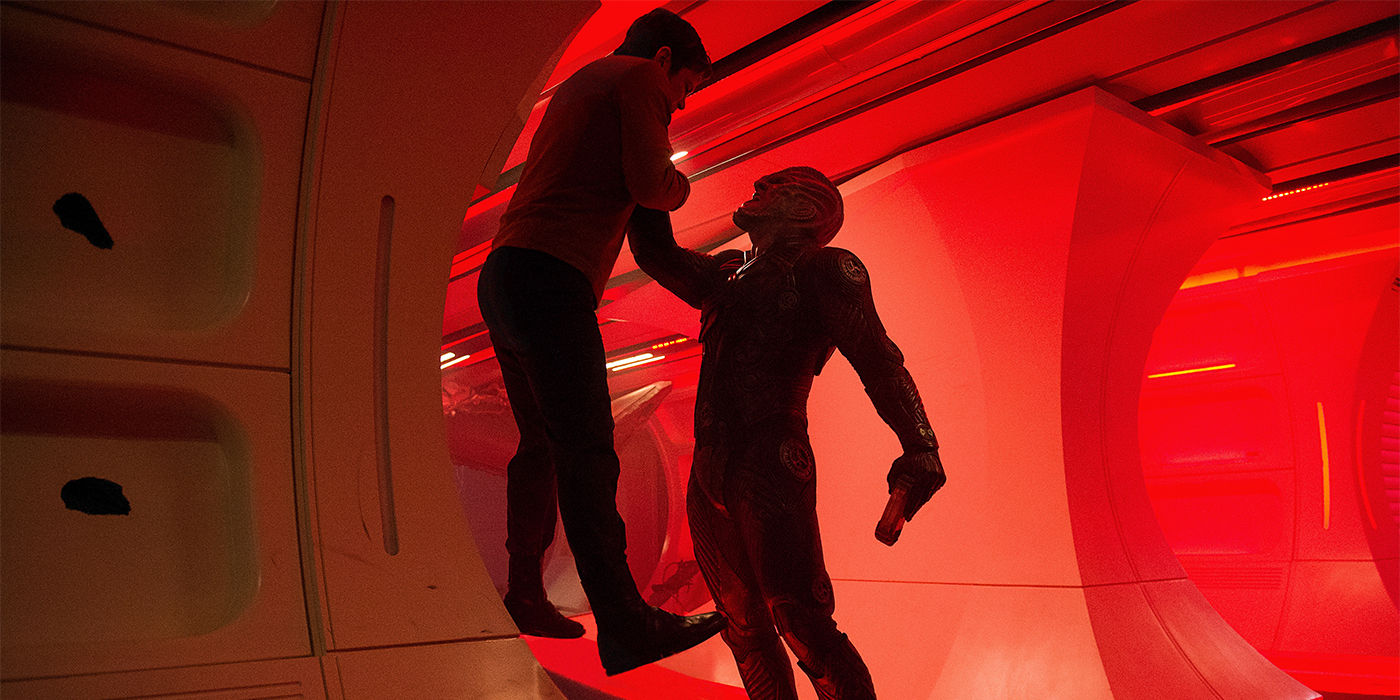 While Manas' suit looks very different from Krall's, it too has the gears: they are simply smaller and fewer in number. One can presume that Kalara, when not in disguise, had a similar suit for her use.

Finally, Krall does age strangely but not unpredictably during the film. In fact, I wouldn't describe the process as "aging". It seems that, when Krall drains lives, he takes on characteristics of that species. Before the arrival of the Enterprise crew, there would have been no humans to drain, and so Krall, Manas, and Kalara eventually took on more and more alien appearances. When he began draining human lives from the Enterprise survivors, Krall

progressively looked more and more human again, albeit with some residual strangeness.

18
Are any of the races in Star Trek Beyond seen in other shows?

16
Was LCARS derived from an open-source codebase?
11
Spock Prime's death date: ambiguity between his life span and his date of death in the alternate time line
6
Why was there a motorcycle on the USS Franklin?
4
Why was Altamid abandoned?
4
Star Trek Beyond, NCC 1701-A Destroyed, why was rebuilt ship not named -B?
1
Was this scene from the Star Trek Beyond trailer in the film somewhere?
19
In Star Trek, why not use the transporter to extend life expectancy?
7
When was Spock's photo taken in the original timeline?
0
Was R2-D2 in Star Trek Beyond?