I read this book at least ten years ago. Any help identifying it would be appreciated.

Characters are teleported to an artificial world where each take over the mind of a different species. I remember a moving sentient plant, a faun-like character, and a wasp-like character. The planet is subdivided into different zones designed for each species.

One of the characters had long sharp fingernails with poison in them.

Thanks for any help, steve

This is the "Well World" series by Jack L. Chalker. The characters are teleported to the "Well World", which is, among other things, kind of a proving ground for a super advanced race to create new species. The world was divided into "hexes" and each race had its own hex. When the main characters get to the world, they go through a thing called "the Gate" where they are transformed into a new species (the characters don't really take the new form over; they become them). The characters are also transported to the "Hex" that their new species originates from.

Here is a link to the appropriate Wikipedia for the author, with sublinks to the books. Here is the direct link to the series.

Here is the cover of the first book. 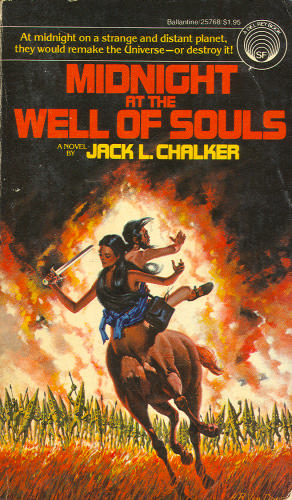 And here's a picture of the faun creature (second book). 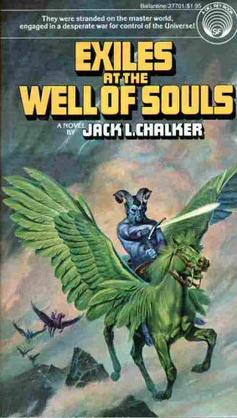 11
Book series about a planet partitioned into different habitats; people/aliens were transported into habitats in new bodies
6
80’s/90’s fantasy book where men travelled across the land and inhabited creatures such as deer, beavers and pixies
5
Book series in which a world is divided into zones and people get transfigured when going from the hub to a zone
2
Looking for a book where the planet is a device to rebuild the universe
16
Planet with hexagons with either magic or technology
5
Novel set on a distant planet, with creatures able to taste and smell through their feet upon the surface
7
Title of a book I read in the 1980s, human scientists transformed into aliens in a world-zoo

16
What book has tall transparent cylindrical column-shaped aliens defending massive mega-structures?
6
YA novel series involving "magical" student warrior
17
Story about a group recreational activity along the lines of "holographic roleplaying on a stage"
6
Looking for a book about a bovine world
19
Pigs, mushrooms and bullets: everything you need to live underground, away from the mutants
9
Looking for an Old Book about a man stranded on Mars
15
Looking for a book about talking dragons with no humans