Who were Krall's men in Star Trek: Beyond?

I watched Star Trek: Beyond and I can't get my head around one thing:

If only a few crew members of Krall survived, who were all the people who flew the spaceships/bees? Were they the crew of the one survivor that lead Captain Kirk to the planet/dust, but why would they be warriors of Krall who abducted them? Or were they descendents of the few survivors?

The quote from the movie is that the planet that Krall/Edison crash-landed on contained a "drone workforce", presumably some sort of (biological?) robots which would explain the sheer quantity of men and ships at his disposal.

Edison: The indigenous race abandoned this planet long ago. They left behind sophisticated mining equipment and a drone workforce

That being said, we see several different species without their helmets on. I think we can assume that since he's not stuck on the planet that he was also recruiting from other nearby races that hate the Federation. 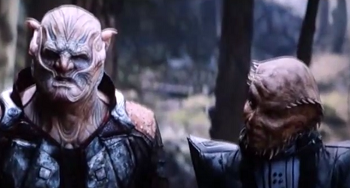 As to who was flying the ships, they appear to be controlled by the drones, following the orders of the small number of actual biological pilots.

Spock: Captain, the flight patterns of bees are determined by individual decisions. Krall's swarm formations are too complex not to rely on some sort of unified cyberpathic coordination.

"That's what the swarm is – sophisticated mining equipment. All those soldiers were just worker drones. Krall turned them into an army, and turned the swarm into a weapon. There's all this great backstory to be explored in the novelisation!”"

Star Trek Beyond: 12 things we learnt from Justin Lin and Simon Pegg

10
Why do the drones explode?

7
Who were the aliens in the "Star Trek: Enterprise" episode "Silent Enemy" (S01E11)?
2
Was Pavel Checkov inappropriately unpunished for sexual assualt in Star Trek?
11
Which pre-Federation wars did this character refer to, and did he describe them accurately?
2
Which Star Trek Original Series episode has a Starfleet Captain leading an alien village?
10
How is a Kelvin Pod different than a standard Escape pod?
36
What are the Starfleet regulations on crew relationships or fraternizing?
23
Were the Maquis who returned on Voyager punished for having been Maquis?
3
Who is the shirtless man getting thrown out of a female officer's quarters in Star Trek Beyond (2016), and is it Kirk?
7
What is the fate of the USS Franklin in the Prime timeline?