I am trying to identify a book I read around 5 years ago. It was about a mysterious dome that covers New York City.

After the dome envelops the city the whole thing is transported to an alien ship. From inside the dome the inhabitants of New York are able to see other alien cities in similar domes on a vast plane. I think they communicate with another city through flashing lights or semaphore. They find out that they are anchored in a doughy blue-gray clay. It is decided to try and tunnel to the other cities. One of the other cities they go to they find all the inhabitants (hamster like creatures) dead from a mass suicide owing to the fact that just the male part of the civilization was picked up. The humans get to the control part of the ship and they find out the aliens are big hairy arachnids. The arachnid aliens started a spaceship that would catalog all the planets autonomously but it went haywire and blew up the planet after it was inspected. Now the aliens race around the universe picking up cities before their contraption blows up the planet so the species can survive.

When aliens abduct New York City, carrying it into space inside a huge dome, the citizens trapped inside must find out why, what they can do to save themselves . . . and to save the dozens of other cities which the aliens have stolen from other planets. 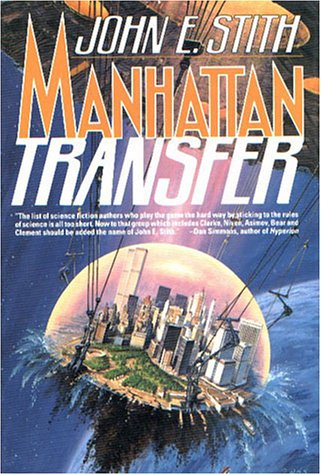 12
Dome (or force field) appeared over a city (not Stephen King's Under The Dome)
12
SciFi/Horror movie featuring alien city landing in a US desert, forshadowed by cave paintings
9
Cartoon movie set on Mars, human kids with alien pet
3
What Anime features a monster blob being fought in New York City?
5
Looking For an Early 2000s Young Adult Book Involving a Human Boy Raised by Aliens
20
Future Archeology in New York City
3
Book about a man abducted by aliens and steals their ship
8
Short story that takes place in post-apocalyptic Georgia, “civilization” lives inside geodesic dome cities?
5
Novel about an alien hunting another alien. Puts a dome over a city
7
Old story about New York City having become “Black New York”