What anime features a boy with a gem or crystal that gives him powers to transform into an organic robot of some sort? [duplicate]

I'd like to identify this anime TV show or movie. I saw it about 6 years ago, late night, on Cartoon Network/Adult Swim/Toonami/Boomerang, in English language.

At the beginning of the show there was these monsters that were attacking a village or a town and then this girl gave him a gem that was on her forehead. The gem bonded to him and then he fled away from the destruction. There was about 5 to 8 people that had these "gems" and they were teaching him how to use and how to transform into these bio monsters.

There were different elements: one guy had the water element. But the kid had a special type of "gem" that nobody knew what his powers or limit was. The crystal or gem was blue.

I found the show. The show is called Xam'd: Lost Memories. I have been looking for this show for more than 2-4 years after I remembered about it. For me its one of the best anime show I've ever remembered. Thanks for your help and trying to find it for me.

Sentan Island exists in a state of dreamlike tranquility, surrounded by the Yuden Sea, cut off from the war between the Northern Government and the Southern Continent Free Zone. Akiyuki Takehara lives on Sentan Island along with his mother Fusa. Despite his mother's strained relationship with his father, Ryuzo, the town doctor, the bond between father and son remains strong.

One day the island's tranquility is shattered, when Akiyuki, along with his best friends Haru and Furuichi, are caught up in an explosion on a school bus. The explosion produces a mysterious light which enters Akiyuki's arm. With no time to understand what has happened, Akiyuki is transformed into a creature called Xam'd. As Xam'd, Akiyuki uses his newfound powers to fight off monstrous invading forces to save Haru, only to be stopped by a mysterious girl who offers him a choice: come with her and live, or stay and turn to stone. Accepting her offer, Akiyuki embarks on a journey of discovery that will take him to new lands, and help him understand the connection between himself and the world of Xam'd.

With very little information to go on, I'm going to offer Tekkaman Blade, released in English dub as Teknoman. The main character, Blade, transforms into Teknoman through the use of a green crystal, and it is revealed at some point that the initial process to turn him (and his family, as it turns out) involves a lot of alien biotechnology that definitely has a strong organic component.

There was an anime called Guyver, named for some strange device (can't recall if the tech was alien or advanced human), a teenager accidentally acquires. When activated it covers him in some sort of armor (maybe organic technology) and bore powerful weaponry which he more than once had to use to defend himself- in some cases from enemies who also had their own 'suits' of guyver armor.

In one episode the armor was shown to have a glaring weakness- an exposed part (the dubbed version called it a 'control rod' I think) that when destroyed makes the armor self-destruct and kills whoever wears it; the hero killed another guyver in self-defense that way.

Could this be Elemental Gelade? The plot of this anime centers around superhuman women called "Edel Raids", which use magical gems embedded in their bodies to merge with normal humans and become living weapons. The main character discovers one of the seven most powerful Edel Raids, a girl with a gem on her forehead: 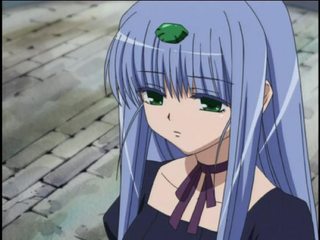 and she merges with the main character to become a sort of biotech weapon: 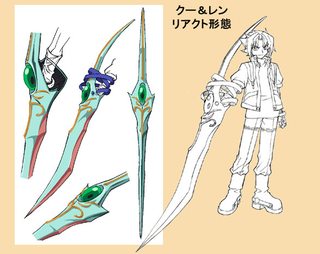 The color of the gem the main character merges with doesn't match your memory, but the other Edel Raids have different colors, including red. There are some sort of monsters that they fight at times, but I can't find a screencap at the moment. I don't believe this series ever aired on Cartoon Network, but it was licensed for American distribution in the mid-00s.

Alma Tandōji lives a lonely and solitary life in a certain port city within the Kantō region. One day, he is approached by Aiba Ruri who asks for his help, for the power of the Sacred Seven which resides within Alma. However, Alma turns her away. In the past, Alma had hurt people with that power. Since that moment, he had foresworn it. But when the peaceful city is attacked by a monster, Alma reluctantly decides to use the Sacred Seven. However, his powers go berserk and the situation becomes even more dire. At that moment, Ruri comes to his aid by inserting a sacred stone made using her jewel necklace and transform him to his true form.
-Wikipedia, Sacred Seven.

Space Knight Tekkaman Blade is a 1992 anime series by Tatsunoko Production, re-imagining their 1970s series Tekkaman the Space Knight. The setup for the series is that the Earth is being invaded by parasitic aliens known as the Radam (Venomoids in the English version). The Radam are led by mysterious armored warriors called Tekkamen (Teknomen in the English version). The Earth military and the Space Knights have been unsuccessful at fighting the invading aliens (and at cooperating with each other) until the arrival of a mysterious young man known as D-Boy, who can transform into the powerful armored warrior Tekkaman Blade. Together with the small, but elite team called the Space Knights, D-Boy must fight tooth and nail for the future of Earth and humanity.

Not the answer you're looking for? Browse other questions tagged story-identification anime toonami or ask your own question.

4
Anime: boy transforms into white+orange being after a terrorist attack
7
An anime about a boy related to gems/crystals
3
Anime where people with the help of some sort of crystal able to get bionic suits
2
Anime similar to Guyver

6
Fantasy series about a disabled protagonist
7
Anime like pokemon but with crystals
7
An anime about a boy related to gems/crystals
2
Anime: male fighter in Guyver-looking biometric armor, destroyed planet where robot lives but fear their death by rust