Why did the control people need to be jacked in to allow the ship to enter Zion?

In The Matrix Reloaded we see Zion control folks jacked into the Matrix to use those Minority Report-type screens to let Link in.

Why did the control people need to be jacked in to allow the ship to enter Zion?

This is the Zionese equivalent of air-traffic control. Using the Construct (e.g. the loading program that simulates the Matrix, but isn't part of the Matrix) as a blank space for them to work in means that they can manage and control far more systems with far less real world distraction than if they had to work on antiquated flatscreen monitors.

The controllers seem to have 3D holo-representations of multiple gates, guns, sensors, warning systems and realtime images of the tunnel entrances all arrayed in front of them, something that would be insanely hard to supervise if they were expected to do it 'old school'.

The film's script describes it thusly

A sleek, clean operations system; controllers sit in comfortable modern chairs effortlessly multi-tasking, interfacing with both the apparently real and the virtual. A hologram of the Nebuchadnezzar on its approach to gate three is surrounded by screens that seem like unframed, floating panes of glass with the colored light of data streaming across them.

VIRTUAL CONTROL: Nebuchadnezzar, this is Zion Control, maintain present velocity and stand by.

The operator's hands glide across screens and keyboards like someone playing a musical instrument. 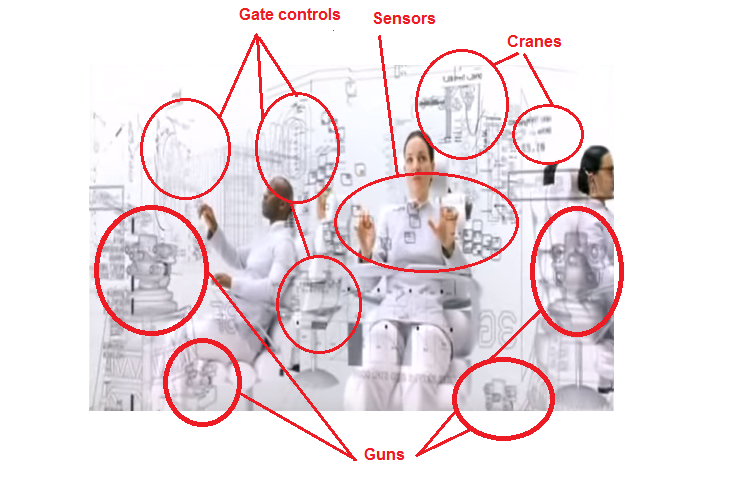 I always thought of it as a virtual traffic control. It was probably much easier, and used way less resources to just write a traffic control program, and use the existing "jacking in" equipment. Also having to be jacked in was a sign of the times of when the movie was written. It was penned around 2000-2001 and wifi wasn't a thing yet.

53
Other than Neo Stopping the Machine Weapons, Are There Clues the Real World is Another Matrix?

32
How could all versions of Neo look identical?
11
How did the land line phone exits work in the Matrix? How did they get from the line they jacked into to the line they jacked out of?
7
Do the machines store hovercraft replicas?
23
What did Zion think would happen to the blue pills if they succeeded in destroying the Matrix?
1
Can hoverships transmit messages to Zion from broadcast level?
4
How many hoverships did Zion have?
4
Why does "The One" need to be awoken from the Matrix
5
Was the governing council of Zion also the new Zion seed population?