Book series about a torturing doctor on a starship

I searched for, and found, this once before, but I've since lost track of it. The protagonist is a "doctor" on a ship, except technology has largely automated health care, so the title is actually given to the ship's interrogator. He uses both drugs and physical torture to extract information. He's presented as being conflicted about the whole hurting people thing, except he's a torture genius when his dark side takes over. I remember a scene where he tortures his love interest with whips. Yes, it was a very odd series.

I believe that there were at least three books in the series (I only read the first one) which were out in paperback by the early 2000s in the United States. I think that the characters' names were somewhat Russian, although that might be because of the whole "secret police" vibe of having an official interrogator on the ship. 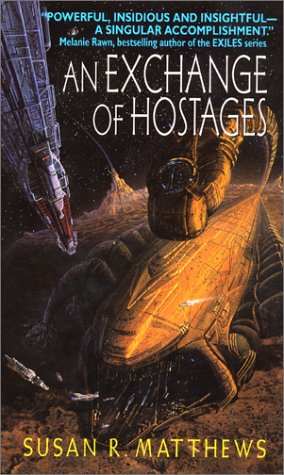 A promising young surgeon, Andrej Koscuisko has come, with great reluctance, to study at a military orientation center adrift in black space. Against his will, he will train here to serve as a "Ship's Inquisitor" — a vocation that runs counter to his deepest moral convictions.

During his tenure, Andrej will earn the devotion of his personal slave. He will gain the grudging respect of the Station Administration. He will make a deadly enemy of his fellow student. He will learn a frightening truth about himself. And ultimately, he will be forced to sacrifice all that he holds dear…