In T2 did the Arnie Terminator make a huge mistake in shattering the frozen T-1000?

In T2 after the liquid metal terminator crashes into the metal foundry he is frozen by the liquid nitrogen payload from the truck.

As a single mass (well apart from the shattered feet) the T1000 has far less surface area than the hundreds (thousands?) of shattered pieces. Less surface area usually means less thermal transfer, so shattering him would have rapidly accelerated the return to a functional state.

So, huge mistake or Hollywood going for the dramatic exploding robot scene?

If you consider the deleted scenes showing the T-1000 "glitching" (which appear in the special edition), then it certainly wasn't a mistake. The act of freezing then shattering the T-1000 caused some damage to its control over its morphing ability.

It was actually this "glitch" that helped John Connor tell the difference between his real mother and the T-1000 in disguise. Here's a still image from the scene, showing the feet of the T-1000 involuntarily morphing into the grating below: 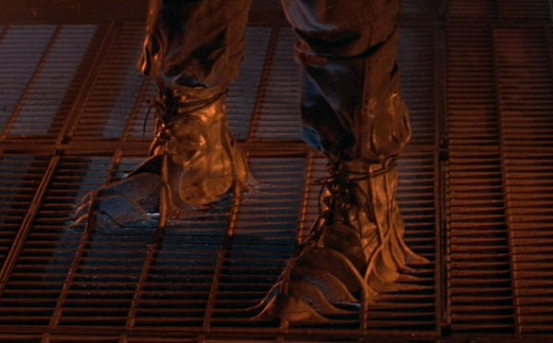 I think that, whether or not it was effective, it was not a mistake.

My impression of what happened is that there was no known methodology for destroying a T-1000 using 20th century technology. Considering the time pressures under which Skynet was operating, it is entirely possible that no knowledge of how to destroy a T-1000 existed anywhere.

Since the T-800 had no knowledge of how to effectively fight or destroy the T-1000, it was forced to experiment. While failed experiments can be dangerous, the knowledge gained is nevertheless valuable in and of itself.

I don't think it's a huge mistake. Despite unfreezing quicker, being separated from his constituent parts may have had some negative effect on the T-1000.

For instance, the T-1000 is made of mimetic poly-alloy, and likely (ok, so were entering speculation town, population: Me) relies on magnetic effects for some conduction effects. It may use gigantic magnetoresistance which relies on a soft magnet's spin being easily flipped at room temperature. Being a part for such a long time, without contact to the other pieces may have slowed it down somewhat.

Along with that as a poly-alloy it may not have had a completely metalic structure and relied on polymer aspects. If these aspects were semiconducting as some polymers are, that would have had a similar jarring effect. Not to mention it would have maybe damaged some of them on a molecular level

In summary, yes it'd likely that it was for that 'Hollywood Effect', but it's not impossible that smashing the T-1000 had it's own benefits for Arney.

I feel it was definitely a huge mistake, he should have picked it up (as many pieces as he could gather) and thrown it into the molten metal into which it is eventually thrown.

After Arnie shoots the frozen T-1000, and the pieces start to reform, there is a shot of Arnie noticing the fragments coming together. What I get from this is that he didn't expect this to happen. Possibly explained by the fact that he is an older model, and the poly-alloy is something he has no information on. Maybe it's cutting edge technology, even in the future. So I think it was a poor judgement, rather than a mistakeI'm pretty sure the "glitching" is caused by high temperatures.

Speaking on a purely speculative basis, I have always thought that the smart move after the T-1000 was frozen would have been for the T-800 to pick it up and throw it into the molten steel. The only reason I can see for not doing so is that it would have made for a less exciting ending to the movie.

I've read book "Terminator" and yes; the act of freezing then shattering the T-1000 caused some damage to its ability to control its morphing capabilities.

42
Why don't Terminators have perfect aim?