Are there wizarding schools in the rest of the "magical" world?

Are there other schools for witches and wizards in the rest of the world? In the books they only speak of 3 schools, but what about Asian or American people?

And even more, were they affected by the events happening in Europe?

Yes, there are wizarding schools outside the UK. Obviously, there's Durmstrang and Beauxbatons, which we hear all about in Goblet of Fire, but there is also the Salem Witches' Institute in the United States:

a group of middle-aged American witches sat gossiping happily beneath a spangled banner stretched between their tents that read: THE SALEM WITCHES' INSTITUTE.

"'Spect they go to some foreign school," said Ron. "I know there are others. Never met anyone who went to one, though. Bill had a penfriend at a school in Brazil ... this was years and years ago ... and he wanted to go on an exchange trip but Mum and Dad couldn't afford it. His penfriend got all offended when he said he wasn't going and sent him a cursed hat. It made his ears shrivel up."

Harry laughed but didn't voice the amazement he felt at hearing about other wizarding schools. He supposed, now that he saw representatives of so many nationalities in the campsite, that he had been stupid never to realize that Hogwarts couldn't be the only one. He glanced at Hermione, who looked utterly unsurprised by the information. No doubt she had run across the news about other wizarding schools in some book or other.

The fact that Hermione was unsurprised at Ron's comment about a wizarding school in Brazil would seem to confirm that there are many foreign wizarding schools, but they are just not mentioned by name.

Asia has a professional Quidditch team, the Japanese team the Toyohashi Tengu, so presumably there could be Quidditch at the school-age level at least in Japan, just as there is with the British teams and Viktor Krum, who plays at the professional level for the Bulgarian National team.

Regarding the Second Voldemort War, Madame Maxime left Beauxbatons for at least a period of time to go with Hagrid to parlay with the giants and her absence from Beauxbatons could have affected the students' morale, just as Dumbledore's absence from Hogwarts (Chamber of Secrets and after his death in Half-Blood Prince) left staff and students uneasy. Igor Karkaroff, Dumstrang's headmaster, abandoned Durmstrang and his students at the end of Goblet of Fire, as he had sold out many of Voldemort's followers to the Wizengamot and Ministry of Magic following the First Voldemort World. He was subsequently tracked down by the Death Eaters and murdered. When he deserted Durmstrang, undoubtedly the Durmstrang students were left confused and were facing a lot of uncertainty.

ETA: 3.28.14 I just happened upon another wizarding school when I was reading something at the Lexicon: Mahoutokoro in Japan. The Lexicon sources Pottermore for this information.

Regarding the Salem Witches Institute, who cares if the witches holding the sign were middle-aged? Some middle-aged people actually attend school as non-traditional students. Or they could have been (somewhat overzealous) alumni. By overzealous I'm referring to the sign the witches have hung up between their tents. For God's sake, here in the US it's totally common for people in their 40s, 50s, 60s, etc, to paint their faces up in their alma mater's team colors and wear a matching clown suit in public, in a show of school pride. If you don't believe that these people exist, definitely peruse the pictorial triumph that is the People of WalMart site.

Finally, as Keen encouraged me in his comment to mention, J.K. Rowling basically says American witches and wizards have their own school of magic:

A: No, they have their own school. You'll find out in Book 4. Hogwarts just serves Britain and Ireland.

Yes, I do note that JKR does not give the name of the American school.

From Goblet of Fire:

"Spect they go to some foreign school," said Ron. "I know there are others, never met anyone who went to one though. Bill had a pen-friend at a school in Brazil ... this was years and years ago ... and he wanted to go on an exchange trip but Mum and Dad couldn’t afford it. His pen-friend got all offended when he said he wasn’t going and sent him a cursed hat."

There aren't any mentions of actual wizarding schools elsewhere in Potterverse.

It's logical to suppose that they exist, just as schools and Universities exist throughout Muggle world everywhere.

As far as being affected, the Voldemort Wars are mostly (though not 100% exclusively) a British affair - aside from Voldemort hunting for Deathstick and his soul fragment existing in Albania (where he got the diadem from earlier). There's definitely no mention of any schools being affected.

For a general "Are there mentions of non-European wizarding world in HP", see: Why isn't there ever any mention of the Americas in Harry Potter?

There are eleven long-established and prestigious wizarding schools worldwide, all of which are registered with the International Confederation of Wizards. Smaller and less well-regulated institutions have come and gone, are difficult to keep track of, and are rarely registered with the appropriate Ministry (in which case, I cannot vouch for the standard of education they might offer).

I’ve put together a list of what we know about each of the schools. Unfortunately that particular page doesn’t have a complete list, but does say this:

The precise location of each of the following schools is a closely guarded secret. […] As a general rule, magical schools tend to be situated in landlocked, mountainous areas (although there are notable exceptions, as will be seen), as such regions are difficult for Muggles to access, and easier to defend from Dark wizards.

In the order they were introduced to the canon: 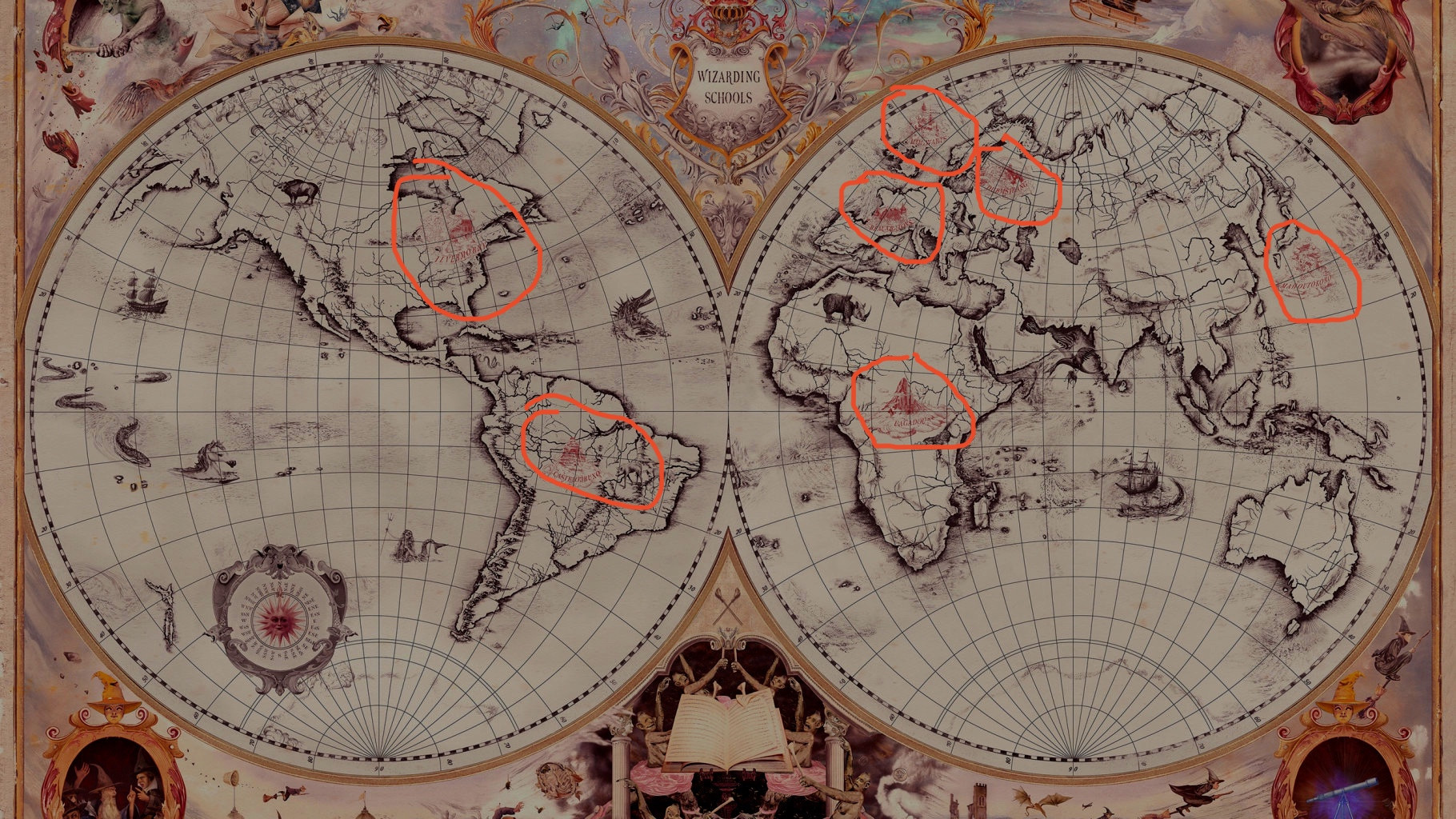 Looking at the map gives a few ideas for other locations:

Mahoutokoro is a wizarding school in Japan. It is mentioned in the wand wood information in Pottermore. Apparently, witches and wizards from this school prize wands made from cherry wood.

On Pottermore J.K Rowling says there are '11' wizarding schools in the world the only ones i know of are Hogwarts(Scotland), Durmstrang(North Scandinavia), Beauxbatons (Pyrenees), and Mahoutokoro(Japan). I hope J.K Rowling will release more information on this subject. I got this information from Pottermore.

As an addition to @alexwlchan's thorough answer, it has recently been confirmed in Pottermore that

As for the name of the three currently unknown schools, it seems that they are being kept secret1, as indicated in the map available at the Celebration of Harry Potter at the Universal Orlando Resort (published in J.K. Rowling's Facebook page): 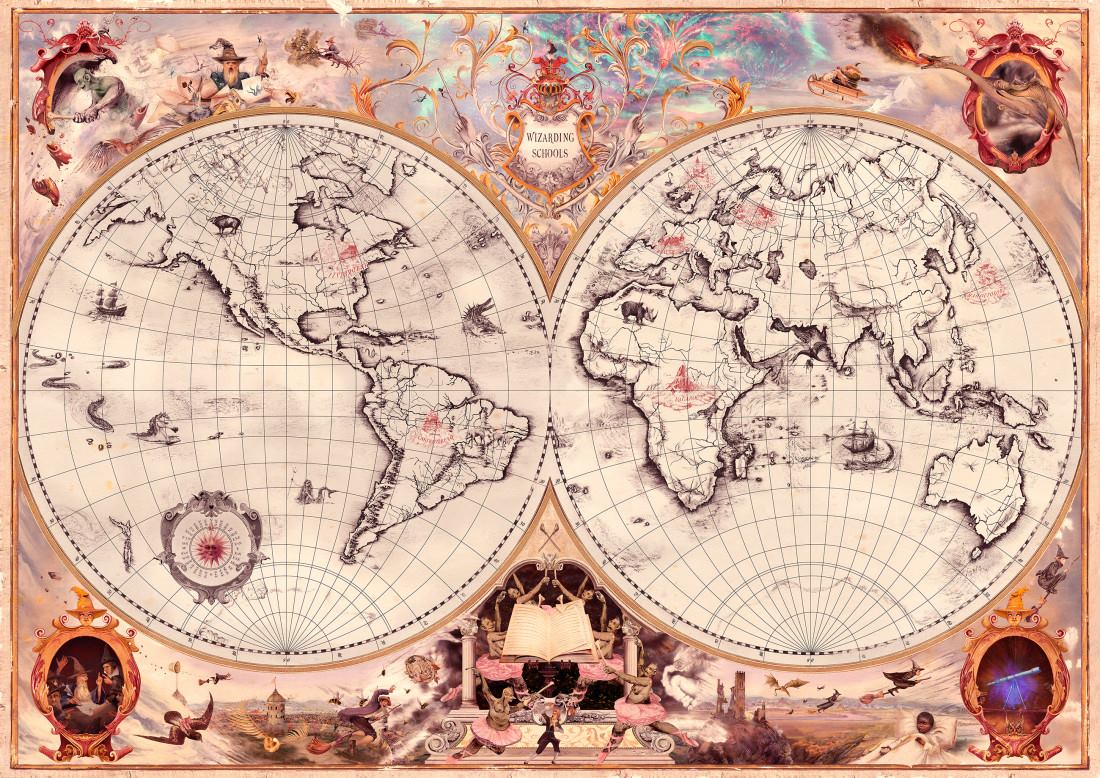 1: Also note that Koldovstoretz School is not in the map nor mentioned in the new Pottermore page whatsoever.

The above three schools are the largest and most well-known in all of Europe; they are connected via a competition known as the Triwizard Tournament, with the winning school receiving a trophy to take back home.

With Hogwarts, the above three schools are connected via the Wizarding Schools Potions Championship, with the winning school receiving a golden cauldron.

In addition to the above, there are five unnamed wizard schools, the locations of which remain undisclosed, except for one in Brazil.

One of these may be the Salem Witches' Institute in the United States of America, but this remains unconfirmed.

Well, other than Hogwarts, there are two that were mentioned in the series, Durmstrang and Beuxbatons. Those definatly arn't the only schools in the Potterverse, but those are the ones I know.

71
Why isn't there ever any mention of the Americas in Harry Potter?
17
What is the American school of magic?
17
Why weren't other schools included in the Triwizard Tournament?
16
Where is Durmstrang located?
7
What are the missing three schools?
9
Where are the other schools of magic beyond the seven already named?
5
What happens to the Muggle-born students from the area of Durmstrang Institute?

71
Why isn't there ever any mention of the Americas in Harry Potter?
20
Were There Witches and Wizards In The Americas Before Europeans Arrived?
8
Are Young Marriages in the Magical World The Norm?
11
Were there foreign Death Eaters?
11
How do Muggle Wars affect the magical world?
4
Do the other wizarding schools have a Book of Admittance?
9
Where are the other schools of magic beyond the seven already named?
9
Did the Wizarding World learn about Voldemort's Horcruxes after his defeat?
6
To what extent does the wizarding world know about the events from the Harry Potter books?