Trying to find a book about a girl in a coma?

I've been trying to find this book, it's about a teenage girl who reads stories which her granddad recommends, and then talks about them with him. She doesn't read a story (I think it's Robin Hood) one time, and tries to Google it while they're crossing a road, and they both end up in a car accident.

After, she ends up in a coma, and her "dream" has a load of the story characters in it. If I remember right, there's Maid Marian, Long John Silver (or at least some pirate) and some other people. I think there's a lot to do with American Indian characters from in one of the stories she's read, but I'm not sure.

If it's any help, the cover was her falling from the back, and the background was half city, half grassland(?) She was wearing a purple hoodie.

I can remember a load of details, but nothing specific enough to search for. Does anyone know what this story is?

This is Far Rockaway by Charlie Fletcher. 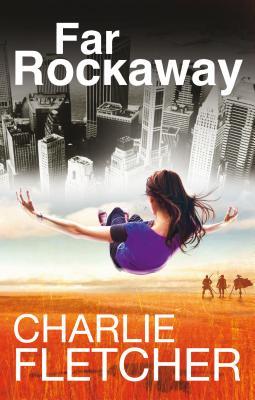 Your description was dead on!

Cat Manno and her grandfather Victor made a pact that one day, just for the hell of it, they'd take the subway and stay on the A-train until the very end of the line where the last narrow spit of land runs out into the ocean at Far Rockaway. This isn't that day. On the first page Cat is knocked down by a speeding fire truck whilst crossing 55th St and 3rd Ave in Central Manhattan. She wakes up in a world made from all the books her grandfather used to read to her, peopled by some of the most memorable heroes of classic adventure fiction, brought vividly back to life. Cat must earn their friendship and help as she begins an odyssey and epic quest to find the mythic Castle at the World's End. And the name of that distant, mythic, wave-tumbled fastness? It is, of course, the castle of Far Rockaway ... If you enjoy reading good books; swashbuckling adventures with sword fights and pirates - then Far Rockaway is the book for you. Join Cat as she embarks on the journey of a lifetime ...

19
Book series about a future where gene-modified sentient animals were used as soldiers and are trying to find a place in post-war human society
23
Book about a girl raised by a computer
5
E-book set in fantasy world with trolls and pirates
7
Movie with an Indian girl helping a willow tree and a horse after playing with the personified wind; other girl is punished for doing the opposite
12
Children/ Young Adult Fantasy Book featuring fairies
12
Novel where a girl, Sre, hatches a dragon, Blue, to defend her from an innkeeper
6
What's the anime where a girl who comes to town to fight an enemy meets a guy who lives with an old man? (It's not Bleach)