What are the dimensions of a Combine synth gunship from Half Life 2?

I've attempted to reverse-engineer the dimensions from screenshots, but this method has proved unreliable. I've found no trace of any record of the Combine synth gunship's dimensions online, and have no way of checking for myself in-game.

I am particularly interested in the nose-to-tail length of the gunship.

I opened the Hammer editor and added a Gunship to get the size of its bounding box, which should give us an approximation of its nose-to-tail length: 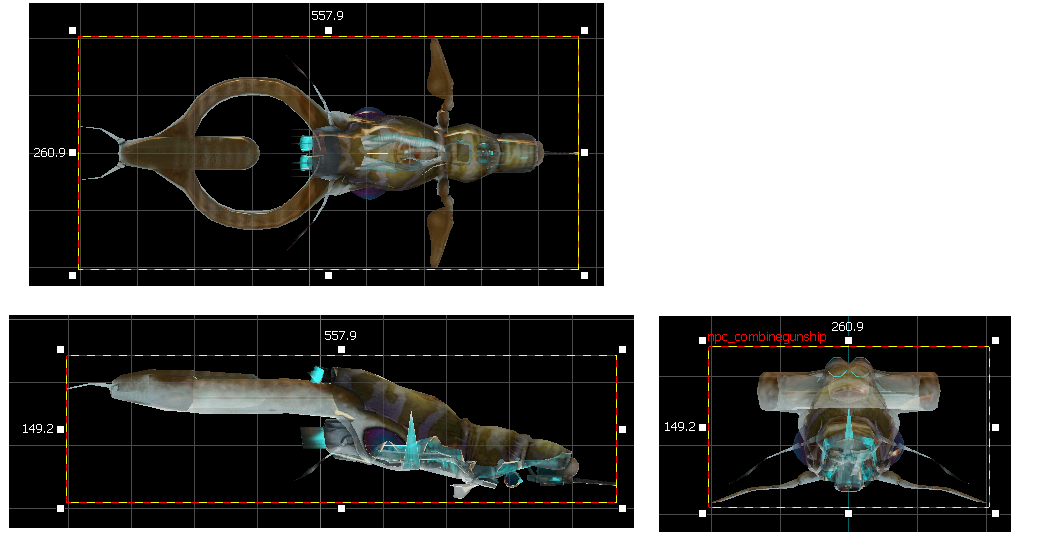 These are in "Hammer Units". According to the Valve Developer Community, there are 16 Hammer Units in a foot for architecture, but 12 per foot for human character models. This gives the length as something less than 45 feet.

To be a little more specific, I rotated it and got as close to the length you wanted (I didn't include the barrel on the front, but I did include the tail):

Not the answer you're looking for? Browse other questions tagged half-life or ask your own question.

9
Are the Half-Life 2 Antlions a Starship Troopers reference?
8
What was the time span over which the events in Half Life took place?
18
Was Half Life 1 inspired by HP Lovecraft's “Fungi from Yuggoth”?
15
Why is Gordon Freeman recognized as a legendary hero in Half Life 2?
24
In Half Life 2, why is the game logo the symbol of the resistance?
5
In Half-Life 2, how many people would fit in Combine Dropship's Troop container?
35
Why are Vortigaunts violent in Half Life 1, but peaceful in Half Life 2?
8
What is the meaning of this drawing of a combine soldier holding a baby next to the word 'Caste' in Half Life 2?
8
Short movies on YouTube resembling Half Life