What is the (current) fate of the model(s) of the Reliant used in the filming of Star Trek II?

Subject pretty much says it all...does anybody know what happened to it? One presumes that there was more than one.

At least two of the models were sold during the fan auction a few years back, including a normal one and a battle damaged version. 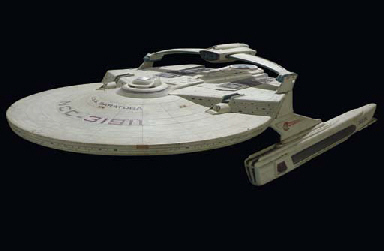 It's been redressed as the Saratoga I and II as well as Captain Batesman's Soyuz class starship. In the latter case, you can see a lot of additions to distinguish it from the Miranda class.

I think in the Star Trek universe, the Miranda Class of the 23rd and early 24th century was Starfleet's version of the mass produced "all purpose" light cruiser. Cheaper than a Constitution or Enterprise class heavy cruiser and more capable than the destroyer. In most games, it's an intermediate between the destroyer (or sometimes Oberth "Grissom" class) and the Constitution/Enterprise classes. Slower but more powerful than the former and faster and almost equally armed as the Constitution/Enterprise but not as much power generated and can't take as much punishment in battle.

Not the answer you're looking for? Browse other questions tagged star-trek props or ask your own question.

14
What Happened to the Original Models from "Star Trek?"

8
What was the software used for gene sequencing in Rise of the Planet of the Apes?
36
What is the largest ship in the Star Trek Universe?
40
What changed William Shatner's mind on Star Trek?
12
What became of the Kelvan technology in Star Trek TOS "By Any Other Name:?
26
What is the strongest profanity used in a Star Trek show?
20
What does "D.Wiz, X.J. (sorc), S. of Mag. Q." stand for in the Harry Potter: Film Wizardry book?