What are all of the races, and where are they from?

In Saga #1, we are presented with numerous races:

What are all of the races, and what area of the galaxy are each of these races from?

In Saga #1, we are presented with numerous races:

This would be Alana (The lady), who is a native of the winged race of the planet Landfall (No name of the race is given). The horned man on the right is her husband, Marko from the moon Wreath which is a satellite of Landfall. (Again no specific race given). The baby depicted in the image is their daughter, Hazel.

The robot is Prince Robot IV, a member of the royal family of the Robot Kingdom, which resides on a dwarf planet near Landfall. Race is given as robot. The winged soldiers are more natives of Landfall, as is the talking monkey. (Although I cannot find a name or corroborating page for the character.) 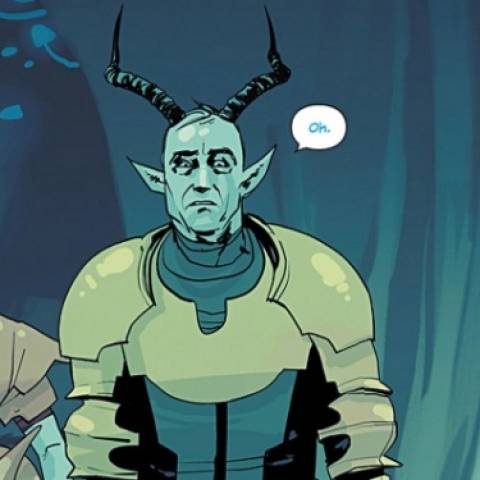 More natives of Landfall (As far as those with wings). As can be seen by the original photo above of Alana and this photo, wings come in all type including gossamer dragonfly types:

Unknown. I cannot find any other references, and this character is not listed on the Saga wikia.

The humanoid is Billy/Will, a Freelancer (mercenary), and a Lying Cat. The cat can presumed to be at least partially sentient, as it can tell when someone is lying or not.

This would be Vez, a Wreath leader who wants Alana and Marko killed.

In addition to these, they have introduced many more variants (Such as the Stalk, a multi-eyed being, D. Oswald Heist (A cyclops), etc., however there are no races given and very few actual planets of origin. The tailed cats are also not listed, but given their frequency on Landfall, one could presume that they are also a native Landfall species.

Not the answer you're looking for? Browse other questions tagged comics saga or ask your own question.

5
Are the screen-headed robots organic?

5
Are the screen-headed robots organic?
3
How many on-going Batman comics are there, and how are they interlinked?
3
What are all the R.I.P.D. comics currently available?
14
Where do the X-Men get all their money/funding?
4
Comic book about a girl who can see monsters hidden among us
8
Are all Infinity Gems of the same size?
29
Comics identification: Priests who are embodiment of 7 sins are venerated as saints
7
Batman and Joker comic where they are compared to tarot cards and Batman gets stuck under a statue