Kalara, formerly Jessica Wolff, was a Human female who served as an Federation Starfleet officer until she was stranded on the planet Altamid. Wolff became the alien Kalara after the use of energy transference technology severely mutated her body.

Where is this confirmed in the movie?

Prior to her transformation, courtesy of the alien device used to prolong her life, Kalara was a Starfleet officer called Jessica Wolff. We see her personnel records at the end of the film along with those of Krall (Captain Balthazar Edison) and Manas (Anderson Le).

The actress depicted as Jessica Wolff is the same actress that plays Kalara, Lydia Wilson. She also appears earlier in the film as one of the officers seen in the video sequence where Krall is identified by Uhura. 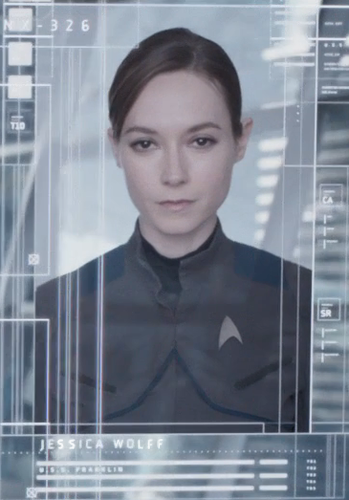 29
Were there REALLY over 73,000 Federation starships commissioned?
54
When Did Vulcans Change from No Emotions to Buried Emotions?
12
How Can Replicators Work Without Mass/Energy Conversion?
22
If every single starfleet officer has to attend Starfleet Academy, wouldn't they run out of space?
17
Why is Worf always called by one name?
35
Was this the only example of a Starfleet issued hat?
16
Why did Captain Janeway feel that using the Doctor as an expendable messenger boy was more important than keeping him around to heal the crew?
8
Why didn't Sisko et al. check Lisa's numbers?