Why did Bones use an Imperial measurement?

In Star Trek Beyond, Spock is punctured by a piece of a bee ship. The wound is in his lower, right abdomen. Bones comments that if his Spock's heart had been a few inches over he'd be dead already. A very similar wound befell Spock in TOS: A Private Little War. Here, Spock is shot in the upper, right chest. Bones comments that if his liver wasn't where his heart should be, he'd be dead already. Those two anatomical statements seem to work out. 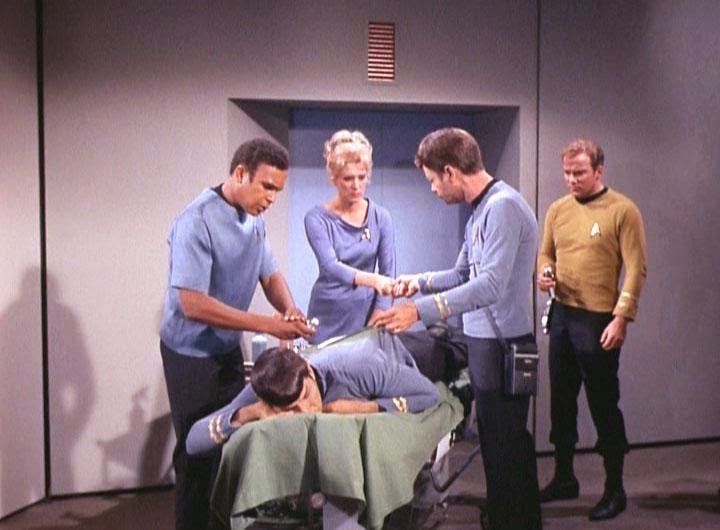 But in Star Trek Beyond, why did Bones use "inch" as a unit of measurement with Spock? Why isn't he on the metric system?

In the original timeline, although they did use metric units in the TNG era, during the TOS era they were still using non-metric units like miles and feet (suggesting either US customary units or imperial units), so it makes sense this would be true in about the same era in the Kelvin timeline. For example, here's a bit of dialogue from the transcript of the second-season episode "The Immunity Syndrome", in which Spock reports some measurements made on a giant space amoeba:

Similarly in the second-season episode "Friday's Child", here is McCoy describing the inhabitants of an alien planet:

MCCOY: They're quite large. Seven feet tall is not unusual.

And thanks to @Valorum for pointing out an example that actually involves inches, from the transcript of the first-season episode "Operation: Annihilate!":

KIRK: We have to duplicate the conditions on the planet, and Spock

SPOCK: Captain, you'll need a host for the next step in the test to determine whether the creature can be driven from the body. I am the logical choice.

MCCOY: Do you know what one million candlelight per square inch can do to your optic nerves?

Not the answer you're looking for? Browse other questions tagged star-trek star-trek-tos star-trek-beyond or ask your own question.

50
Why does Michael Crichton use US Customary measurements in hard sci-fi?

14
How does the Universal Translator handle measurement units?
54
Why does Star Trek use Celsius (SI system), not Fahrenheit (the imperial system)?
36
Where did the nickname of 'Bones' for McCoy come from?
11
Which pre-Federation wars did this character refer to, and did he describe them accurately?
32
Why did the shields behave this way in 'Star Trek Beyond'?
10
Why do the drones explode?
5
Why was Altamid abandoned?
19
Why didn’t they just use the transporter on Krall?
7
Why did some vessels in the 23rd Century use unique assignment patches?
0
What did Spock want Bones to “Remember”?