Why was there a motorcycle on the USS Franklin? 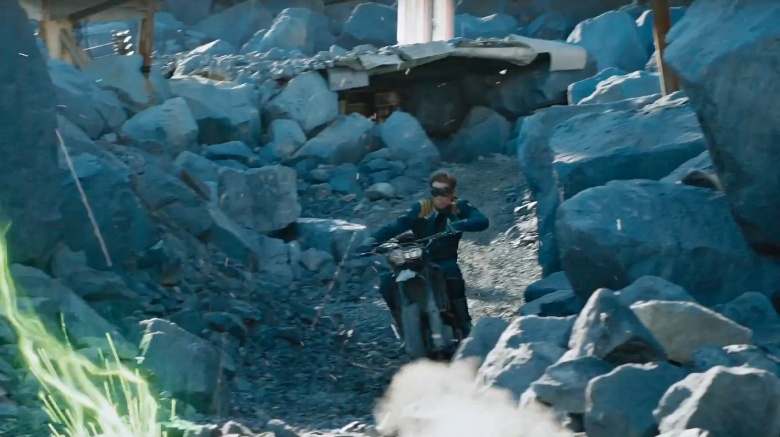 In Star Trek Beyond, while Montgomery Scott is giving Captain Kirk the cook's tour of the Altamid-grounded USS Franklin, they just so happen to come across a full-functional BX-70 motorcycle - one very similar to the one his uncle owned in Star Trek 2009. This will be important later when they dream up a distraction. Fine, but there are some questions we need to address with this:

The reason is very likely the same reason as in the babylon 5 series (in universe at least): A commanding officer is a big fan of motorcycles / the old times and used all contacts he had to get one on board.

Out of universe: Because the writers found it cool (at least that is my impression in both cases).

Unknown at the present time. It almost certainly belonged to one of the ship's crew. There's no recognition of the bike from Krall but beyond that, we just don't know.

This was apparently a "shout out" by director Justin Lin to his earlier films in the 'Fast & Furious' franchise.

When someone else brings up the shot that looks very reminiscent of Letty-Dom flying through the air from the Fast & Furious films, Justin smiles and smirks, “Yeah, well I’m who I am.”

Justin Lin on ‘Star Trek Beyond’ Criticisms: “We Are Trying to Be Bold and Take Risks”

29
How would Starfleet know what a Romulan looks like in Star Trek 2009?
7
Robert April in the alternate timeline
12
How was the USS Columbia able to catch up to the USS Enterprise?
6
Was Krall's suit the source of his ability?
16
Is the backstory regarding the USS Franklin inconsistent or unnecessarily complicated?
15
In Star Trek Beyond, how does terminal velocity help "jump start" the Franklin?
5
Why was Altamid abandoned?
4
Star Trek Beyond, NCC 1701-A Destroyed, why was rebuilt ship not named -B?
8
When was Spock's photo taken in the original timeline?
6
What is the fate of the USS Franklin in the Prime timeline?