Why isn't Spock sucked into space?

In Star Trek Beyond there's a pretty cool scene where Spock and Bones are in a turbo lift when the turbo shaft is severed and exposed to the vastness of space. The turbo lift is subsequently ejected into space and the cleverness of our Starfleet engineers is revealed - the turbo lift is space-worthy, at least, for a while. Then one of the bee ships collides with it for the apparent purpose of capturing its occupants.

What happens next is what confuses me.

It appears the turbo lift doors open to reveal a passage into the bee ship where there are two drone pilots. Why you need a robot to fly a robot ship isn't the question - Battlestar Galactica made it clear that pilots were and weren't necessary. Anyway, either Spock or Bones managed to open the shuttle bay doors consequently blowing the drone pilots into the space. Did I miss something? Why weren't Spock and/or Bones also sucked into space.

I say "sucked" into space only as a joke. Remember in TNG: The Naked Now when Data corrects the conclusion that the Tsiolkovsky crew were sucked into space following a hull breech? They were more accurately "blown out" he corrects. Such bedside manner. :)

Spock shoved something (a knife?) into what the concept artist has labelled as the "Manual Airlock Release power-supply cells" which seems to cause the airlock to open. You do actually see him and Bones tumbling toward the exit a few seconds later but the door shuts before they fall out. 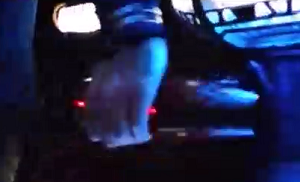 I would imagine the simplest explanation for why they also don't go flying off into space is;

I think that Bones and Spock were not ejected also because the "robot pilots" were ejected from their positions. Since they seem to be robots, they would not need to breath, and so their ship may be programmed to eject them from the specific seats which they sit in to operate the ship.

19
Why didn't Spock die in The Search for Spock?
15
In Star Trek: Into Darkness, why isn't the antagonist more careful?
14
Why Did Spock Need Kyle's Agonizer?
9
How could young Spock be holding a photo of older Spock?
11
Spock Prime's death date: ambiguity between his life span and his date of death in the alternate time line
5
Why was Altamid abandoned?
5
Why were the Franklin's crew not able to return to Federation space or at least call for help?
6
What happened to Spock Prime in ST: Beyond?