I ended up finding the answer only by digging through my various libraries: Bones of the Past by Holly Lisle, (Arhel, Book #2) 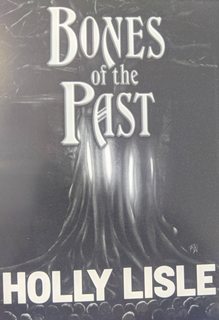 I stumbled upon the first book in the series, Fire in the Mist, when browsing at the used bookstore. And, Wow! So many stories in one. Love the characters like Medwind (with her skulls) and Faia, and the rejected children from the evil tree culture.

Edit: By request, here is a link to a sample provided by the author:

"Seven-Fingered Fat Girl tested the soothing hush of wind through the trees, the soft murmur of a nearby brook, and the restful whispering of leaves—and found the jungle a liar. Jungles were never gentle... She had the point, leading the band of tagnu... ....From both sides, the jungle echoed with the scurrying of heavy feet. Underbrush cracked as the unseen hunters maneuvered to cut off their prey. Then one of the stalking beasts emitted a low, rolling trill, followed by a bass hiccup. Fear hit Seven-Fingered Fat Girl like a gut-punch.

"The water-drums and slit-gongs outside the temple prayed tree- prayers to the far reaches of the winds. Inside the temple, the Yekou, the attendant-clergy of the Keyu, donned their best and brightest silks. They raced from branch-room to branch-room, pulling out their best ribbons, readying their censers, finding drumsticks and headcloths and good slippers. To Choufa, now twelve cycles old, all this activity was worrisome, because this time, it involved her. Between spurts of finding their things, the priests readied Choufa’s group of temple children for the Tree-Naming ceremony.

Choufa had allowed the priests to strip her and paint her green and braid flowers in her hair, but only because Doff kept saying she must. This was an important night, Doff repeated—over and over. It was Choufa’s Tree-Naming, when she would cast her baby- name aside and become Keyunu, one of the Tree-People, if the Keyu so declared...

'Give me first my gift,' the tree thrummed. Immediately, the chief priest responded, 'We obey.' All the drums pounded into life, thundering, 'Blessed be your gift, Great Keyi, and your people who gift you.' Four men in matching green-and-gold silks marched forward, carrying something between them. That something struggled, then screamed, 'No! No! I did what you told me to do! You promised! You promised! Let me go-o-o-o!'

The voice belonged to a girl.

The girl struggled violently, and one of the men carrying her stumbled. Choufa got a brief look at her. She was as naked and green as the ibbiu, but striped and decorated with hideous pictures and words that formed patterns on her skin. She was bald and soft and pudgy-looking, with big sagging breasts and a round, shapeless belly. She was ugly beyond anything Choufa could have ever imagined. Each man held onto her by ropes wrapped around her wrists and ankles. They carried her a few inches above the ground and made a great show of never looking at her...

...The men dumped her at the very roots of the Keyi, and backed off —fast.

For a moment, all the world seemed poised on the point of a very fine needle. The girl lay shaking at the foot of the giant tree, the drums crashed and roared, the ibbiu stared with indrawn breath, and Choufa clutched her beads and prayed, I am brave, I am pure, I am brave, I am pure. The sense of waiting for something to happen—to really happen—filled the grove.

There was no warning when it did. One minute, everything hung in that horrible state of anticipation. The next, the white palps that grew in profusion from the sides of the tree whipped out and around the crumpled, sobbing girl. Great Keyi split his bark open from the roots to the base of the first branch, and his slimy- looking white tentacles flung the ugly girl into his black maw."

"Medwind Song woke to arrhythmic, head-throbbing pounding that rolled down over her from the jungle to the north...

Nokar, ex-librarian, history fanatic and dirty-old- man extraordinaire, was her most recent husband. He was also superbly talented at sleeping through anything...

...She snapped her shoulders back and nodded sharply, once. There were things that could use doing, even in the middle of the night...

She sang the song through a second time and then a third, increasing pace of song and drumming.

Between the hazy twin lights from the candles, a pale, glowing fog grew, drawing form from the smoke of the incense and the damp of the night. The fog descended, separated, shaped itself into little balls of woolly light, and settled into the skulls of Inndra Song, matriarch; of Troggar Raveneye, enemy; of Rasher the Hunter, comrade in battle; of Haron River, grandfather’s father; of the Mottemage Rakell Ingasdotte, friend. And the mist smoothed hazy impressions of flesh over the sculpted bones. Foggy eyelids opened, and beneath them, green lights brighter than the candles gleamed. Ghostly lips formed shapes, the very real bones of jaws creaked, hard-edged whispers scuttled forth like spiders from their drybone lairs. Medwind ceased her drumming and waited.

From behind her, the cat Hrogner hissed and snarled, and when the ghost-figures remained, vacated the b’dabba. 'Wakened . . .' the skulls whispered. 'Wakened . . . alive . . .' The row of glowing green eyes fixed on her, and Medwind... felt ice down her spine."

Try the Edge Chronicles by Paul Stewart, it has the elements you've described but not quite the way you've described, there's the Bloodoaks which eat people and a tribe that worships them, there's a race that makes cocoons which they hang from trees and live in them, there are flying ships that all crash because of a plague, there are several groups who take heads or other body parts and there at least one quest for forgotten things in the forest per book. It's a series of about nine main books with some attendant story collections from the same world.

7
Fantasy Novel - Female Protagonist who climbs a tower and encounters magical obstacles before facing off with a wizard
6
Fantasy novel with wizarding academies and a quest for a powerful spell
13
Fantasy novel where insane character treats dead friend as if he were alive
9
Fantasy novel with giant hypnotising dragonflies and a young witch that has to keep her identity secret
6
Trilogy where people went to another world via portals and had gems embedded in them
8
A fantasy saga with big bad trees that suddenly appear, and make demons appear
9
What was the fantasy novel with a fire/fertility goddess named Fala and a sea god named Sur?