Jennifer from BTTF left behind

In BTTF 2 after Marty and Doc come back from the future (to 1985) where Biff has already gone to 1955 and changed 1985, they stop off at what they think is Jennifer's house and leave her on the porch swing at night. Of course, as that timeline is now changed to Biff's Paradise, that is not her house presumably.

At this point the remaining story of BTTF 2-3 progresses. BTTF 3 ends with Marty coming back to 1985 and arriving at Jennifer's porch where she is still in the same place, waiting to be awoken.

My confusion is this: She was left in the timeline while it changed from Biff's Paradise(BsP) to the "regular" timeline. Considering if the movie uses either the distinct multiverse theory, or one in which there is a single timeline which can be and does alter to accommodate changes within itself, there must be two possibilities:

Single, changing timeline- Jennifer is left on the porch in BsP, but when the past is changed, her and everything in that timeline are changed back to the "normal" timeline. However, Marty and Doc were never in the "regular" timeline to put her on that porch in the first place. It is my opinion that if this is the movie's preferred time-theory, she should be going about her life as everyone else is after the timeline changes.

I know this whole topic is very confusing and hard to straighten out, but my final question is which theory seems to fit best, or is there another one to better address Jen's fate?

The single changing timeline seems to be the one the writers imagined, and they also imagined that when time traveler A is in one era and time traveler B in earlier era changes history, the world will transform around time traveler A via the ripple effect. BTTF writers Bob Gale and Robert Zemeckis wrote up an official BTTF FAQ where they talked about the related question of why old Biff returned to the same 2015 that Marty, Doc, and Jennifer were in, and they mentioned that 2015 transformed into 2015-A around M&D&J in the same way that 1985-A transformed back to regular 1985 around Jennifer on the porch:

1.9: When Doc and Marty are in 1955-A, Doc says they can't return to the future to stop Biff from stealing the DeLorean, because it would be the wrong future. But if that's true, how did Old Biff manage to get back to the same future that he left? Shouldn't he have come back to a different future?

A: As should be clear from the answer to the previous question, we believe Old Biff DID indeed return to a different future — a "2015-A," which would have transformed around Marty, Doc, Jennifer and Einstein (just as Doc explains how 1985-A would change into 1985 and instantly transform around Jennifer and Einstein). This would happen AFTER Old Biff returned with the DeLorean. For this reason, we made sure that Doc had caught Jennifer and exited the McFly Townhouse before Old Biff returned. Thus, by the time Marty and Doc are carrying Jennifer back to the DeLorean, there COULD be other residents in that townhouse — or perhaps the McFlys still live there. It is just as believable that the physicality of the neighborhood did NOT change as it is to believe that it did — so we didn't change it. We decided not to make anything of this idea because this is one of those difficult time travel concepts that general audiences have a real hard time understanding. (Try explaining this stuff to your mother and you'll see what we mean.) A detailed explanation of it would have slowed down the story, and most of the audience doesn't ever think about it. That's why we made certain things ambiguous and left various things open for interpretation in hopes that the possibility of at least one or two explanations would be better than a "definitive" explanation that you could find holes in. Let's face it, time travel is fantasy, so there's no way to "prove" anything. As filmmakers, we try to create a set of rule for our stories and stick by them, and stay consistent within the little "universe" that we've created.

For some speculations about what this implies about the "rules" of time travel in BTTF, see my answers here and here.

As for your comment However, Marty and Doc were never in the "regular" timeline to put her on that porch in the first place, one way I might think of this would be to imagine there was a security camera on the street aimed at Jennifer's porch the whole night; then in the final timeline at the end of part III, what would the tape show had happened that night? I think this is getting into issues Gale and Zemeckis never really considered, but if you go with the theory I suggested in the second of the two answers I linked above, different timelines appear in a sequence in "meta-time", and whenever a time traveler materializes on a given date, they always retain the memories of the "first" version of the timeline where they made that trip through time (see my comments in that answer about their memories and appearances on arrival being 'burned in' to all subsequent versions of the timeline). So, on Saturday Oct 26 1985 at 9 PM (the date and time they arrived in 1985-A in part II according to this chronology), there will always be a DeLorean appearing in the sky over Hill Valley, containing a version of Doc and Marty (and sleeping Jennifer) who remember having just had the adventures in 2015 that we saw in part II. This will even be true in the final timeline, where instead of returning to a horrific 1985-A they return to the "normal" 1985 we see at the end of part III.

I would also speculate that the "Self-Preservation Instinct of the Space-Time Continuum" which Gale and Zemeckis discuss in question 1.19 of the FAQ (and which I discuss in that earlier answer) causes Marty and Doc to still leave Jennifer on the porch in this different sequence where they return to a normal 1985 rather than 1985-A (since after all, when they left her there in 1985-A they hadn't yet realized the timeline had been altered), so that the security camera tape would show her ending up on the porch naturally and then waking up the next morning when Marty arrives in his Western outfit. But as an alternative possibility, I suppose the tape might just show her appearing on the porch via the ripple effect.

There is a single changing timeline

I tried to illustrate why I think there must be a single changing timeline. 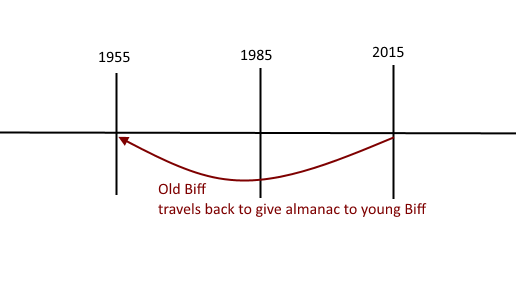 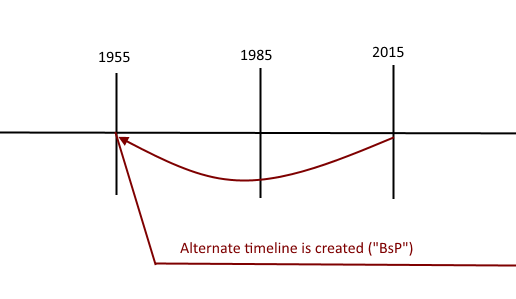 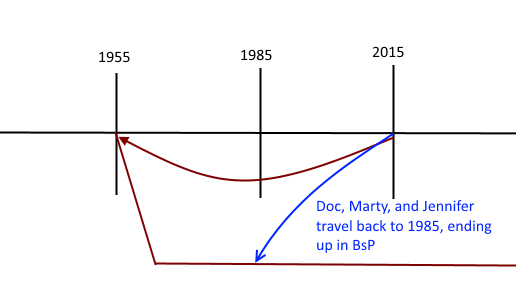 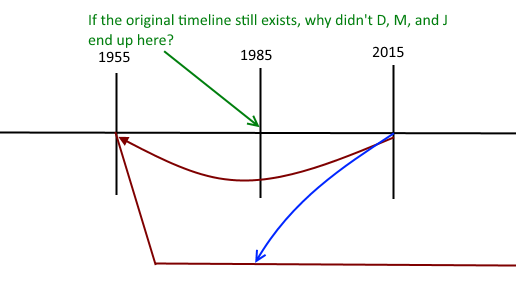 To sum it up, if alternate timelines persist in the BTTF universe, I can't think of any reason why Doc and Marty would have traveled to BsP 1985 rather than to the original 1985 from 2015.

You can think of it as "where would Doc and Marty have dropped Jennifer off if they had dropped her off in the original timeline?"

That seems to be how timeline reversion works in the BTTF universe.

The reason Jennifer was still on the porch at the end of Part III was because when 1985A rippled back into the normal timeline, everything else changed and Jennifer remained on the porch because she wasn't native to Biff's world. Like Doc said, the world literally transformed around her. Had Jennifer been awake, she would've literally saw the bars on the window spontaneous ly disappear, the streets magically become cleaner, and she would also see Biff's hotel shimmer back into the clock tower while everyone who actually lives in Biff's world wouldn't notice.

Not the answer you're looking for? Browse other questions tagged time-travel back-to-the-future paradox or ask your own question.

62
Why was Marty present in his jump to 2015 in Back to the Future 2?
22
How did Clara dedicate Emmett's tombstone in Back to the Future 3?
12
Is Marty McFly Traveling to Parallel Universes?
8
Where did 2015 Biff hide the Delorean in 1955 when giving himself the Almanac in BTTF 2?
5
What happened to Marty-A and Doc-A?
4
Why did Doc appear near Marty's house on the time machine at the end of BTTF 1?
23
If Marty had faded out, would that have destroyed the universe?
0
Why didn't Marty's “you're fired” note fade away as soon as 2015 Biff changed the timeline in 1955?
14
Why does the recording about Twin Pines Mall not change the same way the newspapers and photographs change?