How does Spider-Man use his magnetic webbing in a vacuum?

Spider-Man's webbing requires air to become adhesive, as discussed here. Yet in the latest Spider-Man comic he manages to use his magnetic webbing in a vacuum. How much 'air' does he need? Was the vacuum from opening to space not 'hard'?

My guess here is two-fold:

From Food for Thought: The Empty Calories of Amazing Spider-Man #681, Spider-Man says:

I switched to my magnetic web cartridges. If I aim it right, it should attach to the octobots on all the crew. 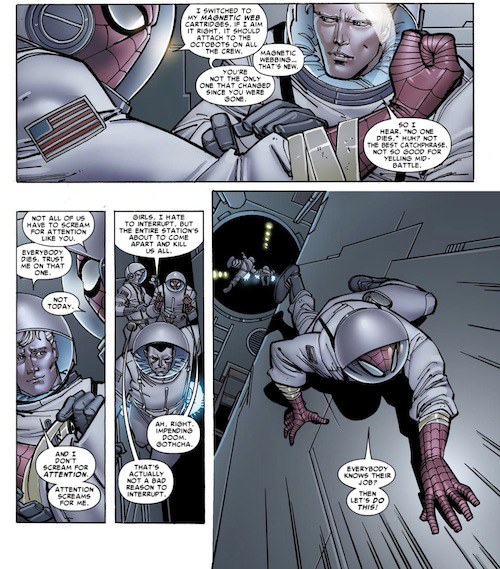 For a while Spider-Man had cosmic powers. This came from an alien symbiote that replaced his red suit. (The suit that became Venom after it was rejected but that is an answer to a different question)

The alien suit meant Spider-Man no longer required webshooters or cartridges to produce webbing. It also provided Spider-Man with some special abilities that allowed him to travel through space and use his powers.