So im looking for a movie I think is from the 80s (maybe 90s) involving two aliens and a robot band (I think).

I remember seeing this movie as a kid during the 90s. The only thing I can remember where to alien creatures riding in a shopping cart in a mall. Outside of the mall the two alien creatures "collided" and fused with each other. And also there was a robot band (I think). I am sorry if this sounds kind of "druggy" or whatever but I have a very clear memory of this particular scene/scenes. I also remember the alien creatures looking somewhat like E.T (short, brownish).

Please tell me that this is not some kind of fever dream I had as a kid.

The plot involved four robot copies of the title characters (who themselves were time travelling musicians and star of the previous movie, Bill And Ted's Excellent Adventure). Towards the end, two of them (the ones that looked more robotic) joined the band. 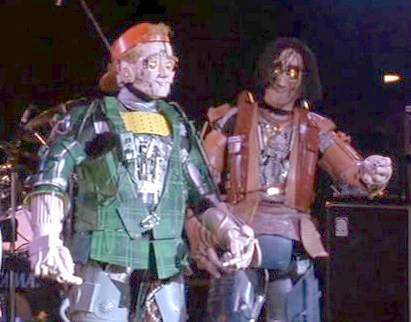 The aliens were called "Station", an alien genius they met in Heaven (after they were killed by their evil robot duplicates), who built the Good-Robot-Bill-and-Ted and they fused together into one larger alien who also could only say "Station". 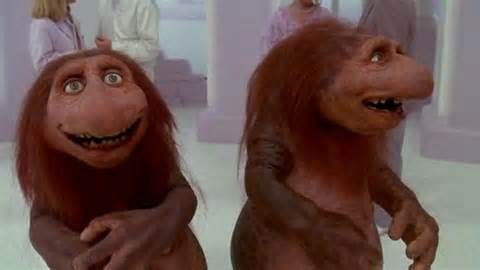 The Grim Reaper, Death himself, also joined the band.

11
Which kids movie, from the 80s involved aliens with guns that could be powered by pennies?
8
Movie Identification: Humanoid Monster/Alien in a bed, 80s/90s, Sci-Fi/Horror
3
Warring aliens transfer mind to transformer like robots in 80s/90s animated movie?
6
Searching for a 80s/90s alien sci-fi (tv?) movie inspired by Lonnie Zamora incident
6
80s/90s movie: teenagers go inside a crashed asteroid/craft, destroy alien eggs except one, alien parent goes on a rampage looking for its offspring
10
Looking for name of sci-fi/horror movie about alien disguised as father
5
80s/90s Adventure Sci-fi Movie about Biological Lab
8
Movie about a little girl and her mom fighting a cyborg in a post-apocalyptic desert