What does the cover art of Cursed Child mean? 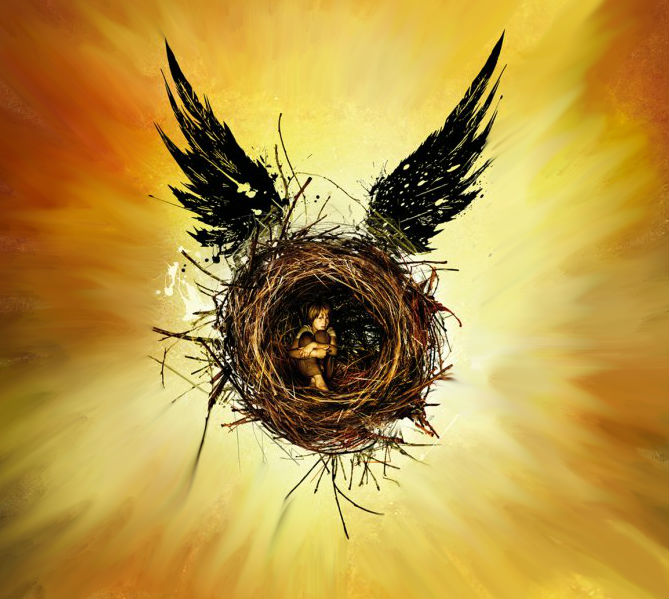 If someone showed me this image a year ago, I never would have guessed it had anything to do with Harry Potter. I would've said it was a Christmas decoration; nothing about it strikes me as Harry Potter-related. Even now, after reading Harry Potter and the Cursed Child, I am unsure how it relates to the story. What does this cover art mean?

Possible sources include but are not limited to J.K. Rowling comments, cover artist comments, or examples from the book(s) etc.

The wings and nest are those of the Augurey, a creature with which one of the main characters (Delphini Diggory) feels a great affinity, even to the point of using the name as her alter ego and having a tattoo of its wings on the back of her neck.

[DELPHI’s cloak has loosened. An Augurey tattoo is visible on the back of her neck.]

ALBUS: On your back. I hadn’t noticed it before. The wings. Is that what the Muggles call a tattoo?

DELPHI: Haven’t you met them in Care of Magical Creatures? They’re sinister-looking black birds that cry when rain’s coming. Wizards used to believe that the Augurey’s cry foretold death. When I was growing up my guardian kept one in a cage.

The Augurey is greenish black. It is intensely shy, nests in bramble and thorn, eats large insects and fairies, flies only in heavy rain, and otherwise remains hidden in its tear-shaped nest. The Augurey has a distinctive low and throbbing cry, which was once believed to foretell death.

Fantastic Beasts and Where to Find Them

The "intriguing winged nest" itself contains a young boy, presumably Harry's son Albus (based on the ginger hair and forlorn expression). The boy is trapped in the nest of the Augurey, as Albus is trapped in Delphini's machinations throughout much the play. The play is also about Albus trying desperately to leave the metaphorical nest of his famous family.

The overall image is also clearly intended to look like a Golden Snitch.

I don't know if you've ever played the Lego games but in DHp1 the cursed child symbol pops up a bit and having replayed the levels recently I keep on wonder if it is a hint to something because, if I remember correctly, you first see it in the Peverell brothers level...

The nest's center showing Albus, when viewed from a distance, also resembles the time turner (used in the play) to transport people back to the past.

The arms of the parents being transported by the time turner in the play are posed to look like a nest around the time turner. The nest could represent parental love.

It does appear that the dark wings would represent the Augurey.

I don't see any reason why the nest's symbolism would be restricted to parental love. It could also represent the Augurey's evil trap.

Not the answer you're looking for? Browse other questions tagged harry-potter art the-cursed-child symbols or ask your own question.