Has an injured Flash ever used super-speed to walk on his hands?

While watching flashpoint-paradox the Flash—in the typical way speedsters are often rendered nigh-useless—suffers a leg injury, therefore preventing him from running. However, a bum leg doesn't mean the Speed Force abandons him: Flash, apparently can still do super-speed everything else (which is a lot) except run. Hence this question.

Has the Flash been shown, after suffering a leg injury and during a mission, using super-speed to move from place to place by a means other than running? For example, I know that, visually, it'd be ridiculous to have the Flash move at super-speed while doing a handstand wearing a cast on his leg or whatever, but that might be exactly such an event's appeal to, for example, a Golden or Silver Age writer.

I am less interested in, for example, the Flash using a (probably, given the rigors of super-speed, tricked-out comic book-style version of a) wheelchair or roller skates and moving at super-speed—while that's in the same wheelhouse, I'm more concerned about the Flash's seeming vulnerability during combat scenarios and how it seems writers believe the Flash largely immobilized if some villain gets lucky and breaks his shin.

In The Flash (v1) #146 (1964), the story "The Mirror Master's Master Stroke" (auth: John Broome, art: Carmine Infantino and Joe Giella) has the titular villain switch legs with the Flash (yes, switch legs) and our hero is forced to run on his hands instead so that he can defeat him. Not quite the same as having an injury to his legs, but close enough, if you ask me.

Here's a key panel from that story: 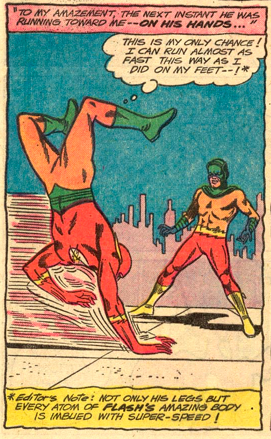 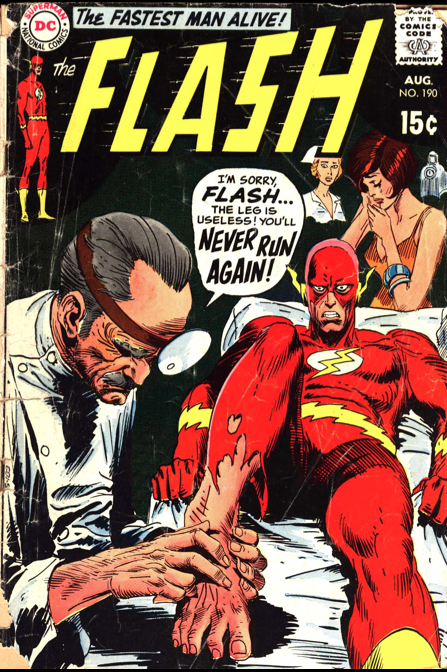 Within the story Barry Allen goes to a rather elaborate, Silver Agey ruse to prevent people from learning that he is temporarily incapacitated, involving a spare Flash costume that he sews shut, fills with "energized gas" and controls with transistors that -- oh, never mind. But in order to stay in proximity with his Flash RealDoll he uses a wheelchair at super speed; he also vibrates to remain invisible: 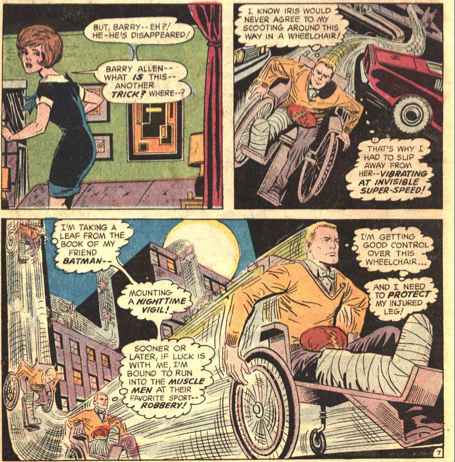 Addendum: Nowhere in the story is there any reference made to Flash having any kind of accelerated healing; I am not sure when that power became canon, but apparently it was not yet so at this point. However, at the end of the story there is a final scene that hints at this. Note that the explanation given here is not that he heals super fast, but rather that the same vibrations that he used to become invisible have some kind of therapeutic effect on his broken bones: 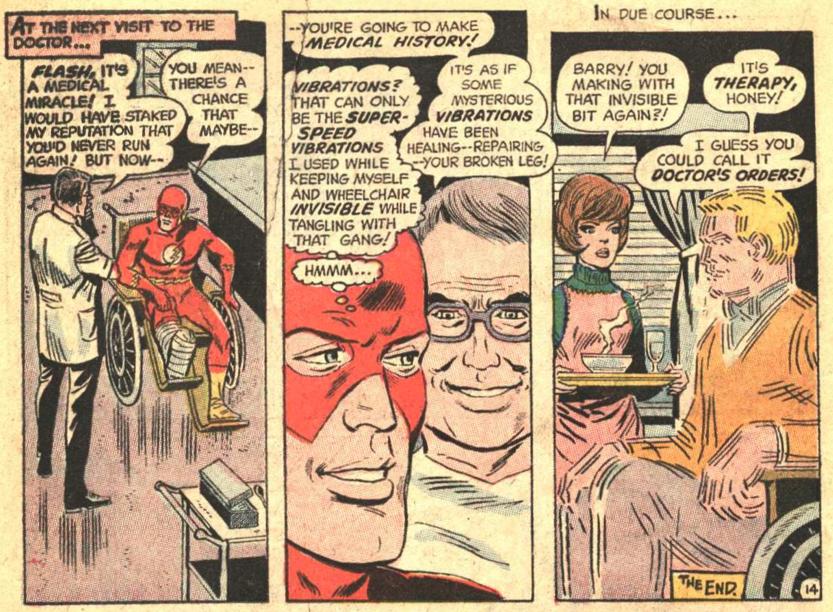 There was also a silver age Justice League story where the villain (Brain Storm, a personal favorite) gave physical handicaps to the heroes - Superman was blinded, Green Arrow lost his arms, and the Flash's legs were merged into a single leg. They of course learned how to triumph over their disabilities and defeat the foe. The Flash did it by super-speed-hopping. 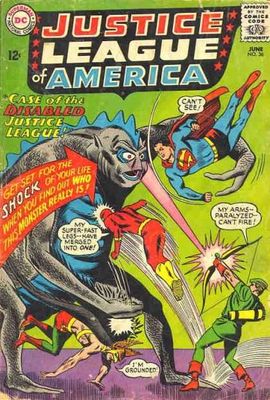 Consider a person whose leg is injured in the real world. Can he walk on his hands? Similarly, Flash can only do at super speed what he can normally do at "regular" speed. Thus, he would not be able to do gymnastics or "walk" on his hands at super speed if he has not trained himself to do so at "human" speed.

Note that things such as dodging bullets, running up walls, etc. are based on normal movements speeded up. Note that people have "run up walls" in real life because of the movement. Dodging bullets is like dodging a ball thrown slowly..

Not the answer you're looking for? Browse other questions tagged dc the-flash dc-animated-universe or ask your own question.

15
What would the Flash's tracks look like in damp sand?
12
Was Flash able to hear anything at super speed?
20
How does the Flash breathe while utilizing his super speed?
14
Does Flash age slower because of his ability to run at relativistic speed?
7
How did The Flash originally obtain Super Speed?
6
Can the Flash use his powers and super speed without the Speed Force (e.g. outside the DC universe)?
7
Does the Flash slip on ice?