So, I had a question pop up from a while back about In Star Trek why is there a kill setting on phasers? and it made me remember an offbrand Choose Your Own Adventure book that I read somewhere in the 80s or 90s. It was space-based and I remember that you got a phaser (or similar futuristic pistol) and they frequently asked you whether you were using stun or kill, but the result was almost identical in each case, only varying in two cases, one where you got a bad ending for using the "kill" setting (because you needed the humanoid target alive) and one where a beast was charging you and if you used the "stun" setting, it bulled right through and trampled you. The other thing that I remember was that there was a high-tech helmet that you could choose to wear. If you did, you gained a point or two to your Intelligence score as it boosted your intelligence (I actually want to say that there was a random chance of it instead killing you or lowering your intelligence score).

I'll be honest... I'm not 100% certain I'll even recognize the books when I see them, but I figure it's worth asking.

I believe this is "Starship Traveller" one of the Fighting Fantasy series of game books by Steve Jackson games. 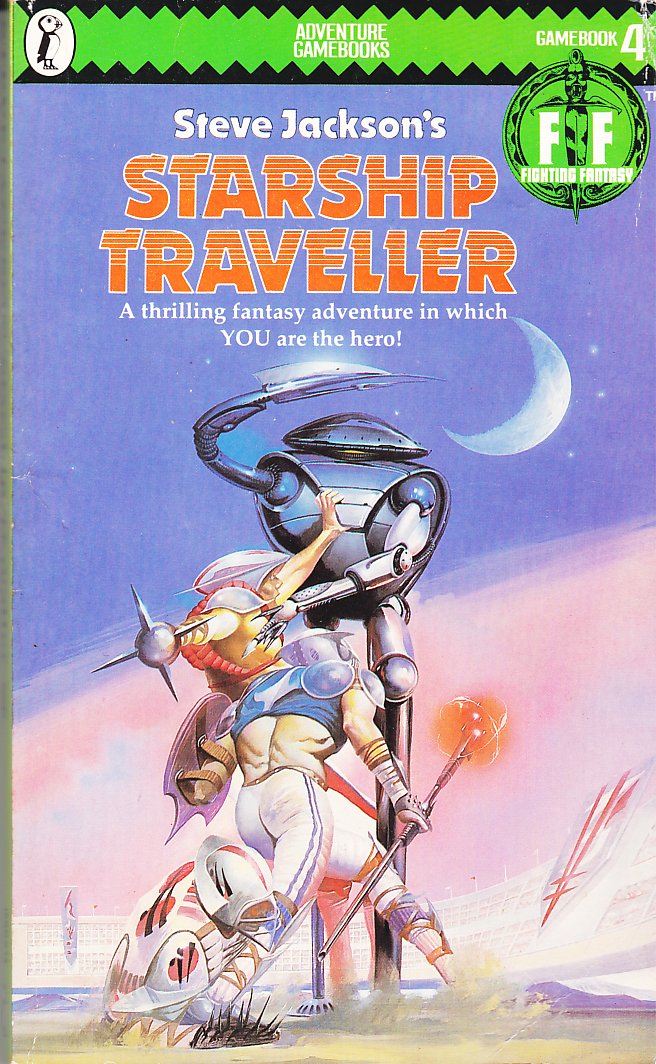 The use of "stats" that could go up and down was one of the things that made me think this was the series in question, even though it was mostly fantasy... stat-based game books were pretty rare (at least, in my experience)

I found a few different blogs which talk about individual people's playthroughs and came across some of the things you remember.

The stun setting of a phaser causing an death from an animal, from here:

When we get to the planet, though, we are chased by green anteater pigs. In a strange twist of fate, Security Guard Failure is killed outright when a tree falls on him without any warning (we're given no choice to save him). My medical officer is then crushed beneath an alien monster and dies, too. I try to shoot this weird crew-crushing alien pig thing, but it seems to me immune to the stun setting on my phaser because that only served to make it angry enough to tear my arms off

A quick fiddle with the controls later and we were beamed back to our ship, along with a helmet I acquired from one of the aliens, which turned out to be some kind of cybernetic skill-enhancing thingy.

Although from one site I found Intelligence doesn't actually seem to be one of the stats, I can chalk that up to a misremembering that it actually increased something else.

Not the answer you're looking for? Browse other questions tagged story-identification space choose-your-own-adventure or ask your own question.

32
In Star Trek why is there a kill setting on phasers?