Can either Colossus or Negasonic Teenage Warhead actually fly a plane?

In Deadpool, we are shown Colossus and Negasonic Teenage Warhead walking to the X-Men plane and then in the next scene we see the plane take off.

I have never seen anything in the comics or in the Marvel Cinematic Universe that either of them can fly a plane.

Was it Colossus or Negasonic Teenage Warhead flying the plane? Or did they have a pilot fly it for them?

The jet is not just a generic plane, but the X-Men's own custom and private jet, the Blackbird (inspired by the real-life Lockheed SR-71).

As the school is actually a training ground for mutants, and as over the years we have seen many X-Men piloting it, it seems reasonable to think that part of their training involves at least being able to fly it under normal circumstances.

Apart from that the plane contains a copy of Cerebro (and Cerebra, later), so it can probably fly even on its own.

Way back when, in Uncanny X-Men #143, (cover-dated March 1981, which I think means it first became available in comic book speciality shops around December of 1980), Kitty Pryde had her first solo adventure.

She was still very much the "new recruit" at that point, having only been residing in the X-Mansion, and getting trained by Professor X, for the last few issues before that. She was a mere thirteen years old. But when a creature called a "N'Garai Demon" (shamelessly modeled on the monster from the original Alien movie with Sigourney Weaver) invaded the mansion in search of revenge on the X-Men (because of a previous fight -- long story!), Kitty tried various ways of coping with it, and finally ended up luring the demon into approaching the Blackbird from the rear, where she could fire up all the engines at once and incinerate it in the sudden blast.

I found a a scan of part of that sequence from the original story. (Not showing the incineration, but what leads up to it as Kitty begins working out a new plan and moves into position.) Please note that in the last panel on the bottom right, Kitty is thinking:

I don't see it yet, in the tail camera. Now to run through the ignition check list. Please, Lord, don't let me forget anything. 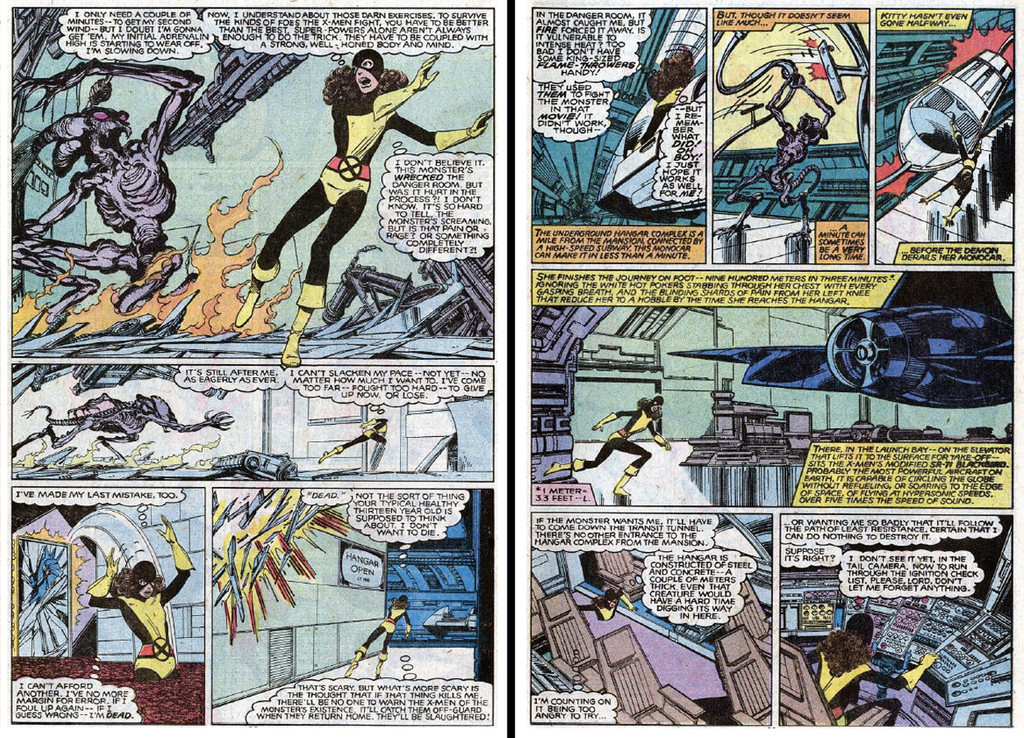 So her thoughts and actions in that scene made it crystal-clear that, even at this early stage in her career, when she was still a thirteen-year-old recruit, her training had already included memorizing the full checklist of things to do in the cockpit of the Blackbird before takeoff. And how to actually fire up the engines, etc., after you'd done everything else!

This demonstrates that, by that time, Professor X had evidently decided that part of the curriculum for new mutant students went this way: "Start teaching them how to fly the Blackbird as soon as possible, since you never know when a worst-case scenario may come along which makes it a matter of life and death for any available X-Man to know what to do in the cockpit!" (And let's face it: the superhero lifestyle being what it is, "worst-case scenarios" do tend to keep happening!)

Since Colossus had already been an X-Man for a while at that point (he joined at the same time that Storm, Wolverine, Nightcrawler, and some others did in the comic books of the mid-1970s), it's a safe bet that by this point he was already an experienced pilot of the X-Men's regular Blackbird, even if he didn't get to show it very much. (As I recall: Scott Summers, aka Cyclops, seemed to be the most frequent choice for pilot when the entire team was traveling long distances.) By now, I suspect that the comic book version of Colossus could practically fly the thing in his sleep, if necessary. So I see no reason to assume things are much different for a movie version of the character. He may not be a great pilot, but he's probably been "cross-trained" so that he can function at the helm of the Blackbird if the more gifted pilots among the X-Men are unavailable at the time.

All senior students of the school (X-men and New Mutants) are taught how to fly a plane, specially the Blackbird.

This is issued several times across the comic

Since only Colossus and Negasonic were there, and since they flew the Blackbird, clearly at least one of them was capable. This should not be surprising since in X2, Rogue and Iceman, both rather junior members of the team also flew the Blackbird. Either the Blackbird is really easy to fly (unlike its real life counterpart), or Professor Xavier really packs the skills training in, or both.

So, even if we had reason to think Colossus couldn't fly the plane (which we don't), we could safely conclude that she could.