When and what was the first Star Trek scene ever filmed?

With this being the 50th Anniversary Year of Star Trek, there are a lot of documentaries and we're getting a lot of background of the early years of Trek. However, we're celebrating the actual first premiere of the show on TV (September 8, 1966, as we all know), and before that ever aired, there were two pilots shot, the first being The Cage.

One could make a case that the actual "birth" of Trek would be on the first day of filming, since that would be after all the characters were worked out, the plot was fleshed out, and most of the prep work was completed.

Is there any record of what the first scene ever filmed of Star Trek is and when it was shot? Or perhaps as much as a shooting schedule for that first day of shooting?

According to this image from www.startrekhistory.com, the first item on the shooting schedule for "The Cage" was scene 15, the interior effects shot for the transporter sequence.

Please note that the working title for this pilot (as seen at the top of the call sheet) was "The Menagerie" and should not be confused with the episode that would eventually share the same title and recycle some of the footage used.

With apologies for the crudeness of my editing 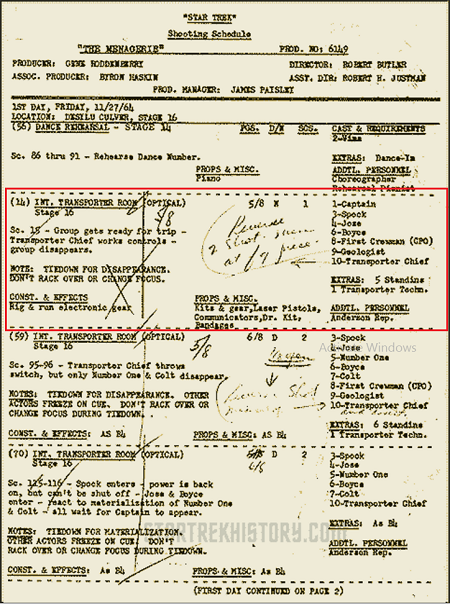 Prior to that was a rehearsal for the dance sequence but it's unlikely that rehearsal footage would have made it into the episode.

9
What rank was Kirk when he first boarded the Enterprise in Star Trek (2009)?
13
Pen-servo in TOS Assignment: Earth & The Doctor's Sonic Screwdriver
18
Are Enterprise security personnel trained in combat?
24
Did Kirk and Uhura actually kiss?
5
What is the SFX process for phaser beam accuracy?
18
From what Star Trek episode did Wobbler learn of the grandfather paradox?
6
Which scene of Star Trek (TOS) featured a verbal countdown?
12
Was Star Trek the first television series with a vegetarian character?
41
What was the first 3D CGI used in Star Trek?