I'm having a really hard time remembering the name of a book that I read last summer about aliens that had psychic abilities on this one planet. A crew either crash landed on said planet, or were banished there, or something like that.

The whole basis of the book was that the aliens were persuading the humans to dunk themselves in a pool of muck and they would then be basically possessed by aliens who had passed, recieving psychic powers in the process.

They were trying to do this to gain enough psychic energy to become "risen" or basically become gods, but then the humans realized that it would destroy the universe if they succeeded.

I know the title has the word Hell at the beginning of the word. "Hell*****" (which also happened to be the nickname of the planet).

Hopefully I gave a good enough description for you guys to help me out.

A description and book cover is below. But, some points that seem similar include:

Only the most desperate colonists dare to make a new home on Hellhole.

What no one knows is this: the planet Hellhole, though damaged and volatile, hides an amazing secret.

If you look at the cover it shows a man leaning over what appears to be a lake/body of liquid in which the alien presence exists.

recieving psychic powers in the process.

....that, when unearthed, could tear the galaxy apart.

Self evident from the title of the trilogy. 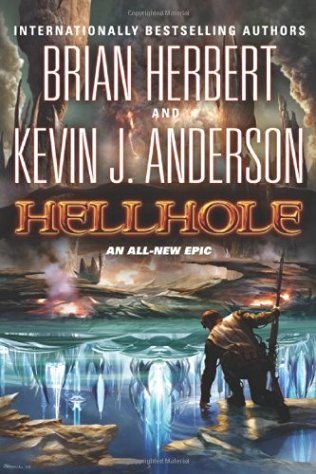 Not the answer you're looking for? Browse other questions tagged story-identification aliens space psychic or ask your own question.

11
ID this story: aliens test Earthling children for psychic powers
10
Sci-fi book about overwhelming psychic space critters where each chapter is written in a different writing structure?
12
Story where stardrive test-pilot visits alien solar system and is attacked by a psychic (alien) child
11
need help finding the name of a book about psychic powers, aliens, and brain in a vat type plot
8
Sci-Fi Book involving Aliens with Halos
2
Sci-Fi Book about psychic twins
6
Sci-Fi novel. Near Future, Aliens, Brain Implant, Resurrection, Explore the Stars
14
Post apocalyptic sci-fi book where Earth is destroyed and humans from the Moon and Mars go on a rescue mission