I remember having a textbook in jr high, possibly 10th grade, in the '90s, which had an SF section. One of the stories I have identified as “The Star Beast” by Nicholas Stuart Gray. The title of the other one I can recall eludes me.

It is about a small boy who is sick at home. As he gets sicker, he begins to imagine that the disease is taking him over and changing him, organ by organ, into something else. As each part is taken over, he ceases to be able to feel it. Eventually, it reaches his brain and everything goes black.

When he wakes up, he gets up and goes to touch his pet bird. He closes the cage and waits to see what will happen.

I can't remember what the other ones were. Some of the stories were illustrated with full-page blue-colour line illustrations.

Update: Identified another story from an answer here. "Zoo 2000".

A scan of the story from the textbook was included in a comment, which jibes with my memory.

I believe the story with the boy and the pet bird is Ray Bradbury's "Fever Dream." The link on Wikipedia has a version of the story that ends without him touching the bird, but I found other references that do:

In the parlor, before the others entered, he quickly opened the bird cage, thrust his hand in, and petted the yellow canary, once. Then he shut the cage door, stood back, and waited.

I imagine the second version is a rewrite but perhaps someone more knowledgeable about Bradbury might have more information.

This might be the collection Skylark Science Fiction Stories, from 1980. Here is the cover (which totally does not have Darth Vader and an X-wing on it). 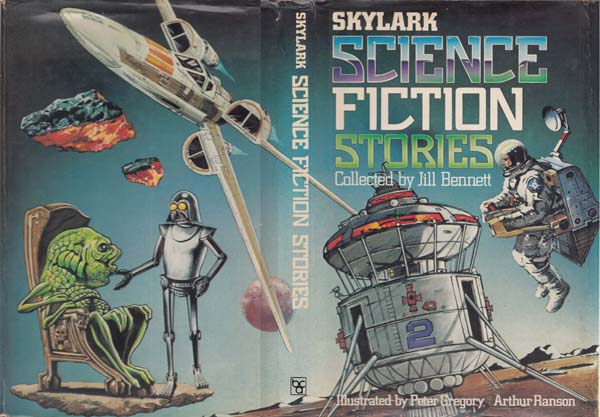 It is illustrated, which matches the question. Moreover, the contents seem to be geared towards the children or young adult readerships, with light stuff like Clarke's "Feathered Friend" and Asimov's "The Fun They Had."

However, I am posting this as a possibility because there is also a story called "Bit by Bit by Bit," by Elizabeth Mace. I am just making a guess here based on the title (and the fact that Mace wrote fairly dark science fiction and fantasy for children), that it might be the story about the boy's body being taken over, bit by bit by bit.

Not the answer you're looking for? Browse other questions tagged story-identification books aliens young-adult or ask your own question.

24
Old sci-fi story: radiation mutated the animals, a boy loses a limb, but it's okay because "humans used to do great with only two arms"