Does John Stewart have his own comic line in the new-52?

Growing up on the DCAU, John Stewart was the green lantern. As a child, I honestly didn't know who Hal Jordan was. Because of that, as an adult, my impression of Hal can be summed up as follows.

I've been picking up the new 52 series recently, but have been avoiding the green lantern titles because I just dislike Jordan. I've seen Stewart featured in side-roles in other series at the local book store, but I'd be curious to know, does John Stewart have his own series where he is the primary protagonist? 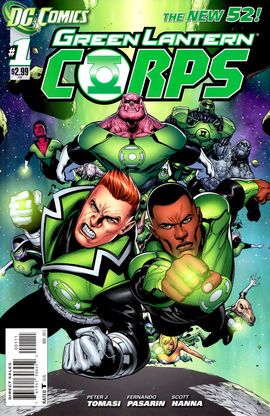 Unfortunately, John Stewart is not the lone protagonist of any New 52 comic line.

Not the answer you're looking for? Browse other questions tagged dc green-lantern the-new-52 or ask your own question.

16
Why is Hal Jordan Featured in Most Green Lantern Adaptations?
7
Does Superman have his own set of laws?
5
Could Green Lantern: The Animated Series be considered part of the DCAU?
6
Where does the new 52 start?
9
Why does the Green Lantern have to say the oath when charging his ring?
3
Did the events of Convergence have any importance for The New 52?
5
Has John Stewart ever worn a mask to conceal his identity?
5
Does every Lantern Color have its own language like the Indigo Lanterns?