What is the architecture of the Floo Network?

Muggles have 3 models of network architecture: 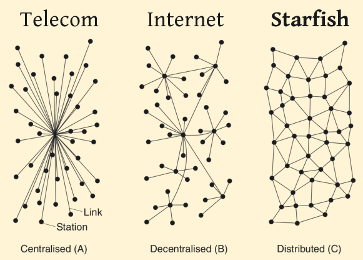 How is the Floo Network built? It has the ability to:

Here's an insight into the possible structure of the network: In the Chamber of Secrets, Harry sees glimpses of other fireplaces as he is traveling through the Floo network:

It felt as though he was being sucked down a giant drain. He seemed to be spinning very fast — the roaring in his ears was deafening — he tried to keep his eyes open but the whirl of green flames made him feel sick —something hard knocked his elbow and he tucked it in tightly, still spinning and spinning — now it felt as though cold hands were slapping his face — squinting through his glasses he saw a blurred stream of fireplaces and snatched glimpses of the rooms beyond — his bacon sandwiches were churning inside him — he closed his eyes again wishing it would stop, and then… He fell, face forward, onto cold stone and felt the bridge of his glasses snap.

The detail of seeing multiple fireplaces before reaching the final destination would imply that the Floo network is not a centralized network model. That leaves us with a decentralized model, a distributed model, or something else (because magic).

As Zala pointed out, because of temporary connections and connections that can be easily disconnected, it would make a decentralized model quite an unattractive option. Thus I conclude that the Floo network most closely resembles the distributed model, unless there is a special network model that wizards and witches have knowledge of that Muggles do not.

EDIT: R.M. in the comments on the question suggested that a completely connected network would be feasible for wizards and witches. However, again with the evidence that a person traveling the Floo Network catches glimpses of multiple fireplaces, I doubt this is the case. Why stop at different nodes in the network if you can get to another fireplace in a single leap?

From Pottermore's article on the Floo Network (written by JK Rowling):

Nearly every witch or wizard home is connected to the Floo Network. While a fireplace may be disconnected by the use of a simple spell, connection requires the permission of the Ministry of Magic, which regulates the Floo service and prevents Muggle fireplaces becoming inadvertently joined up (although temporary connection can be arranged in emergencies).

In addition to domestic fireplaces, there are around a thousand fireplaces across Britain connected to the Floo Network, including those at the Ministry of Magic, and various wizarding shops and inns. The fireplaces of Hogwarts are not generally connected, although there have been occasions when one or more has been tampered with, often without the staff’s knowledge.

This is pretty much all the information we have on the Floo Network other than what's in the books. JK Rowling never saw fit to go into sufficient detail as to explain, for instance, whether the graph-theoretic structure of the Floo Network is centralised, decentralised, or distributed as in your three diagrams.

Think of the Floo network as a set of roads, rather than an information network. On the internet you send a packet of information down a wire to a node, which then resends it to the next location, based on one of the topographies provided in the original post. In such a case, you have to worry about the integrity of the nodes and how they handle the information. But a road network is different, although it is similar to the "internet" graph. Rather than having nodes, you have intersections. There's nothing between you and your destination but the pathway. The downside, though, is that the traveller must be in control of its pathing, wether that's you, your driver, or the floo powder swirling around you. The intersections make no decisions, they simply exist.

Now in the floo network, it is described as Harry passing by several fireplaces and catching glimpses of what's through them. These glimpses can be confirmed as normal because, in The Cursed Child, Ron mentions seeing Albus and Scorpius with Delphini while he was going through the Floo. As such, these glimpses would be akin to seeing houses while driving down the street. Adding or removing a fireplace would have as much effect on the Floo network as building or demolishing a house along the road. It doesn't affect the path, only the availability of the end point.

As for ministry control over the Floo network, this would be analgous to your local government's control over public roads. They build and maintain whatever it is that you travel along. Finally, it seems likely that wizards would have built on the concepts of roads, since there is such a long and rich history of such pathways, rather than information networks which are a rather recent discovery.

It would have to be Meshed/Distributed. Otherwise single Fireplaces couldn't be safely dissconnected without risking to dissconnect others. As temporary connections are possible as stated by JKR every other possibility would end in quite the mess.

I have a feeling it's Decentralized, like the internet. Although a centralized network might make sense, given the Ministry's apparent power to regulate Floo network approved fireplaces, I think it is doubtful that Floo would have originated from a central point the way that telephone companies originally hooked each individual household up to a specific line and directed calls through a switchboard operator. Floo was probably in use from household to household and later became regulated by the ministry. Or, much like the modern internet, it was started as a government project and was expanded by other witches and wizards.

Zala brings up a good point, which is that disconnecting a fireplace without risking disconnecting others might make you think it's a completely distributed network, but I think you need to consider the fact that traveling through someone's fireplace is not the same as exiting it, and that, much like borgin and burke's, a fireplace owner might have the ability to disable the ability for others to exit through that chimney, without removing it from the network entirely.

My real reason for thinking it's decentralized though, is that, if you think about how Floo networks might have been first created, a large ministry down approach doesn't make sense, given what we know of witches and wizards. I can easily imagine small Floo networks being started up between relatives (imagine a witch in England using Floo powder to easily visit grandparents and cousins in India and America) or friends (imagine a group of Hufflepuffs starting up their own small network to keep in touch after they all leave Hogwarts and go their separate ways), and there got to be so many witches and wizards using it (and misuing it) that the ministry had to step in and regulate the thing so people stopped accidentally trespassing in other people's living rooms. So, small centralized networks which were later connected to each other makes the most sense to me.

Based on @DBPriGuy's answer, the structure could be something like this:

similar to a large Muggle highway with periodic exits.

My thought would be a internet architecture or telecom this is because the user needs to address the exit location, (you would not need to do this with the high way idea), to have to have either architecture would also allow Mr Weasley to connect the dursleys fireplace to the floo network without alerting floo regulation panel, witch may also rule out the Telecom architecture, has increased pressure on the system would be noticed by the authorities.

Additionally a decentralised architecture would mean that it would be safer to travel along the floo network as any problems or disconnections would allow users to be safely redirected the caveat for this is the dursleys fire place where the fireplace was connected but there was a barrier, this would be consistent with the idea of users being able to see into other uses houses and uses not currently engage the system being able to see people currently in transit.

There is also a possibility users could have as a local network has demonstrated in the Prisoner of Azkaban. ( this opens the possibility of the flu network being more of a collection of different techniques of connection rather than having a single architecture)

24
Why Isn't Platform 9 3/4 on the Floo Network?
16
How do people not crash into each other when using popular Floo network destinations?
8
Why isn't entry through the floo network protected like entry through apparition?
12
Are muggles able to use the Floo network?
25
What is the provenance of this Harry Potter and the Chamber of Secrets quote
10
How did Mundungus convince the Order to use the Seven Potters plan?
28
Why didn't Sirius remind Harry about the mirror when he used Umbridge's fireplace?
6
Does the Floo Network only work in English? What about accents?
3
Can you travel to a Fidelius Charm concealed building using The Floo Network?